Crash Into Me (Shaken Dirty, #1) by Tracy Wolff 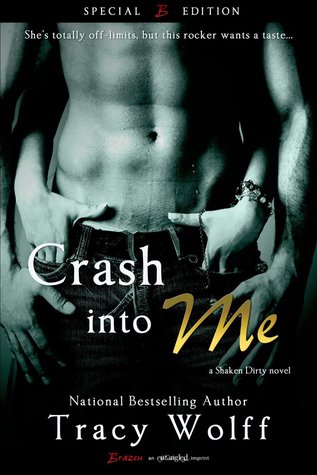 ***Copy of this book provided by publisher in exchange for honest review.***

"Jamison Matthews has lusted after Ryder Montgomery since she was a preteen. But now that Ryder and her brother's band, Shaken Dirty, has made it huge, she's just one of many pining for the brooding lead singer. Too bad Ryder still sees her as a little sister. Not that it matters. Her brother would never allow it, and the last thing Jamison wants is to be another notch on a rock star's bed post. Even if it's Ryder's.
Ryder doesn't deserve happiness. After his fame destroyed his last girlfriend, he swore he'd never fall in love again. So when Jamison, the girl he's been in danger of loving for years, joins the band on the road, he'll do anything to deny the sparks between them--even after one hot night together. But Jamison is determined to show Ryder that he's worthy of love--her love--and that she's all grown up and ready to play."

I think I found my new Olivia Cunning. I have the softest spot for rock stars/bad boys. They are my absolute favorite in harem of fictional men. Kellan Kyle & D-Bags, Sinners, Sole Regret, The Mighty Storm and I can't wait for Exodus End novels. Now there are new bad boys to add to my ever growing list - Shaken Dirty.

First book in Shaken Dirty series by Tracy Wolff is a story about Ryder Montgomery, lead singer of the band. He has everything we want in our rock stars -voice, looks, guitar skills (but other skills too), reputation and interesting background. Lucky lady who gets to devour this new rock god is Jamison, little sister of Ryder's band mate Jared. Oh yes ladies, double treat - rock star and older brother's best friend fantasy.

But it's not just that fantasy...that will make you love the book. Okay, the whole premise of the story is one big cliche, but whether it will work out or not - it's all up to the author. Tracy Wolff had done a fine job. It's not a bunch of pornographic scenes like it was case with first Sinners on Tour book (that was my biggest problem with it no matter how much I love those guys). There is a really good story behind whole hotness and steamy scenes. Ryder is believable character, author managed to make him look like real person with insecurities, problems and bad choices. We get to see a man behind the whole rock star mask. Speaking about it, Tracy had done really good job with dual point of view. You notice difference between parts that are told form Ryder's and Jamison's perspective.

Can I come with you guys too? Life on the road, traveling from one place to another, meeting new people almost everyday is probably the main reason why people are attracted so much to that lifestyle. Not to mention doing something you love. Jamison looses everything that is considered important for everyday, "normal" life and she gets to do something crazy, to fulfill that fantasy we all want. Sleeping in the bunk above the guy you had crush since you were kid - hell, yes! Epic make out sessions - sign me in!

Troubled boys. So, I get info that rest of the band will get their books too. I am so excited - Tracy, what do I have to do to get early copies super early?:D Good news is that we will not have to wait whole year for new sequel - they should be published every three months. Let's hope that publisher won't change that schedule. I am desperate to see what happens with Wyatt.

Blog love. If you're still not sure about this, check out Rachel's review on Waves of Fiction.