New York Times bestselling author Nalini Singh takes us into a dangerous and exhilarating world where a deadly, beautiful archangel and his once-mortal consort are caught in a fury of twisted darkness…

One of the most vicious archangels in the world has disappeared. No one knows if Lijuan is dead or has chosen to Sleep the long sleep of an immortal. But with her lands falling into chaos under a rising tide of vampiric bloodlust, a mysterious and ancient order of angels known as the Luminata calls the entire Cadre together to discuss the fate of her territory.

Accompanying her archangelic lover Raphael to the Luminata compound, guild hunter-turned-angel Elena senses that all is not as it seems. Secrets echo from within the stone walls of the compound, and the deeper Elena goes, the uglier the darkness. But neither Raphael nor Elena is ready for the brutal truths hidden within—truths that will change everything Elena thinks she knows about who she is…

Nothing will ever be the same again.


I don't know what's up with me this year since I've rated quite a few of the newest and most expected installments of most of my favorite series with 3 stars. Blasphemy, I know!
Never thought that the day will come I'll rate Singh's Guild Hunter series lower than 4 stars, but that day has come people and I can not lie. Unfortunately, I'll have to agree with other readers who said that this book was more of a "filler" and while I did like it, it didn't blow my mind like the rest of the books in the series. I did crave this installment to be Bluebell's & Sparkle's story and was a bit disappointed we've got Elena & Raphael again instead, but the main reason for my rating is:
~ the slow pacing/dragging of the story at the beginning and towards the end which made me want to skip pages. IMO, the author resolved the main mystery in an antclimatic way and I've found the behaviour of some important characters considering their past unrealistic. And there was too little Bluebell/Illium, damn it!:(
I won't say anything else about that, because there would be spoilers. The things I loved on the other hand are our lovely and fierce consort Elena & her archangel Raphael who are still in the honeymoon phase, of course not to forget our beautiful Sparkle/ Aodhan who had an important role in this installment (yessss!) and the new creepy characters known as the Luminata (w.t.f. O.O)

No matter my rating, this series still remains one of my top urban fantasy series out there and I highly recommend it to every uf reader out there. The next book is again included in my most expected reads of 2017 list. Will I finally get my Bluebell's & Sparkle's story? It remains to be seen.*fingers crossed* 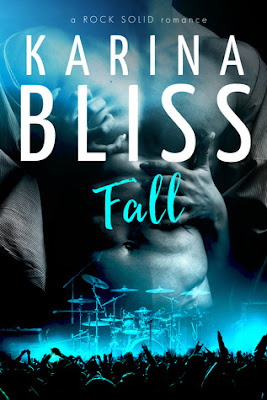 Keep Rage together at all costs...

Powerhouse PA Dimity Graham is off her game. Her career is everything to her and she never lets anything personal mess that up. So how can she explain getting busy between the sheets with Rage's nice-guy drummer Seth Curran? She's supposed to be keeping this band out of trouble, not getting into it.
But before she can put everything back where it belongs, Seth needs her help.

Faking a relationship seemed like a good idea that night, right before they fell into bed together. But standing on New Zealand soil, facing the people he disappointed to pursue his dream, Seth doubts he and Dimity will convince anyone they're hot and crazy for each other. To his surprise, Dimity is working her magic on everyone and they're all convinced this is the real deal. The problem is, he's almost convinced, too.

***MY REVIEW***
Fall is the second book in the Rock Solid series, however it has different main characters than the first book. Nevertheless, I highly recommend Rise as well, simply because it really is such a great novel! Rise was about the rock god Zander, and Fall is about his PA Dimity and band’s drummer, Seth. 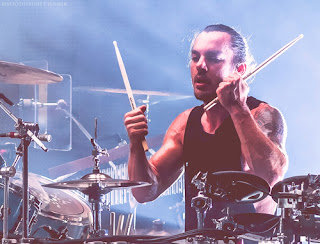 On the surface, Dimity and Seth couldn’t be more different. She’s the ice-queen, he’s the nice guy.
This is Dimity:

She shook her head, unable to answer him, unable to imagine anyone loving her enough to make the offer. She wasn’t the kind of woman who inspired forever. It was hard enough living with herself sometimes.

And this is Seth:

Everyone loved Seth. He could transition from playing pool with roadies to discussing economics with financiers – he even loved kids. Dimity had even seen him kiss a dog once.

But their differences are precisely the reason why the fit together so well. Dimity was an amazing protagonist, she’s complex, seemingly cold, focus-driven, ambitious, and sharp-tongued – overall a strong woman and we need more characters like Dimity in contemporary romance novels. Dimity hides her vulnerabilities behind her tough exterior and Seth is the only one who sees the fragile woman underneath. On the other hand – Seth. Oh Seth. Where do I sign up for to get a Seth of my own? He’s the nice guy, with a wild, pagan side which only occasionally gets released, he’s not intimidated by Dimity in the slightest. He teases her mercilessly, he simply gets her.

The book has friends-to-lovers theme, plus they’re faking a relationship in order to help Seth get his ex back. Yet, the book is not all about relationships drama, which I appreciated, other topics are explored (e.g. Seth’s complicated relationship with his father) and other characters get to share the spotlight as well. For example, Zander has an important role in the novel. He’s Dimity’s boss, but he’s also so much more, he’s her mentor, her constant in life. He too was once, like Dimity is now, married to his career, and now that’s he is moving on in his life, pursuing other interests, Dimity feels lost, doesn’t know to whom to look up to anymore. She’s thrown off her game. Therefore, Dimity’s relationship with herself if also given attention, she realizes which things matter most in life.

The reason why I love Karina Bliss’s books so much is because of her writing. It’s what distinguishes her from other authors of this genre. She structures her novels well, pays attention to the words she chooses, sentences flow perfectly together. After reading just one chapter, you can tell – this woman can write! And it’s a pure pleasure reading when someone writes this good. Her characters are relatable – even though they’re rock stars! You get the heartache, yet they don’t take themselves too seriously. You get sweet, and you get sexy. I immensely enjoyed Seth and Dimity’s story and I can’t wait to see what Karina Bliss prepares us next!

*ARC copy provided by the author in exchange for an honest review.**

Check out book #1 on Goodreads: Rise
Read my review of Book # 1: Link

People you meet online aren't real. Except that they totally are.

So, yeah, I play Heroes of Legend, y’know, the MMO. I’m not like obsessed or addicted or anything. It’s just a game. Anyway, there was this girl in my guild who I really liked because she was funny and nerdy and a great healer. Of course, my mates thought it was hilarious I was into someone I’d met online. And they thought it was even more hilarious when she turned out to be a boy IRL. But the joke’s on them because I still really like him.

And now that we’re together, it’s going pretty well. Except sometimes I think Kit—that’s his name, sorry I didn’t mention that—spends way too much time in HoL. I know he has friends in the guild, but he has me now, and my friends, and everyone knows people you meet online aren’t real. I mean. Not Kit. Kit's real. Obviously.

Oh, I’m Drew, by the way. This is sort of my story. About how I messed up some stuff and figured out some stuff. And fell in love and stuff.


So many books, so little time -- that's what 2016 has been like for me. On the bright side, I got to read some authors that have been on my must-read list for too long, and I've been lucky in picking my reading material because the books I did read introduced me to a lot of amazing and lovable characters. Alexis Hall is one those authors, and Drew and Kit, the stars of Looking for Group, are among those characters.

As Drew says in the blurb, this book is sort of his story. About how he messed up some stuff, and figured out some stuff. And fell in love and stuff. And it's a sweet story. A really sweet story that had me a bit worried at the beginning. Drew plays Heroes of Legend, an online game, and the story starts when he joins a new guild. There are entire transcripts of the members' conversations in the book, and descriptions of their raids, and I, well, I had almost no clue what was happening during those raids or what even they were talking about. So, yeah, I got a little worried, but as soon as Orcarella (Drew) and Solace (Kit) started chatting in the game, all my worries vanished. Their chats were so cute they always made me smile.

What came next was the messing up, figuring out, and falling in love. Drew liked Solace from the start, but there was that thing that he believed Solace was a girl. When she turned out to be a he, Drew went through a phase where he was disappointed first because until then he was only into girls, but then he realized that even though Solace was Kit, a boy, he still liked him. Luckily for him, Kit liked him too, and they decided to not only hang out together in HoL, but in real life as well, where they continued to be adorable in building their romantic relationship. Drew had a few moments when I wanted to smack him a little because he was messing up, and I felt bad for Kit. In the end, Drew figured things out, and made his apologies, and everything was adorable once again.

So, yeah, I finally read a book by Alexis Hall and I liked it.