"Carter Montgomery spent most of his life blending in, and he liked it that way. It was always better to be seen, not heard. And while a theatric streak and friendly demeanor might have fooled most people, he knew the truth—he was the shy one. The quiet kid most people forgot about. Some might have considered that a bad thing, but those people all wanted to be in the spotlight.

The only place Carter didn’t mind attention was on stage, with The Hellions. Once content in his comfort zone in Seattle, Washington, he only knew three things: confrontation was to be avoided, keeping the peace was priority, and the moment he lost Kate Parker to Professor Ryan Campbell, he had no clue what to do with his life. Playing gigs, working at Pike Place Market, and watching BBC after the love of his life sailed off into the sunset just wasn’t going to cut it anymore.

Desperate to escape his rut, he takes a cue from Kate and chooses a random place to relocate—a small island across the country, where no one knows his name and memories of unrequited love aren’t found at every turn. Just when he thinks he’s found the perfect place to unwind and sink back into the shadows, in bursts Whitney Sinclair, a saucy firecracker who loves life and refuses to settle for second best. Full of contagious energy, she dares him to be brave, convincing him that it might finally be time to tell the world what he wants." 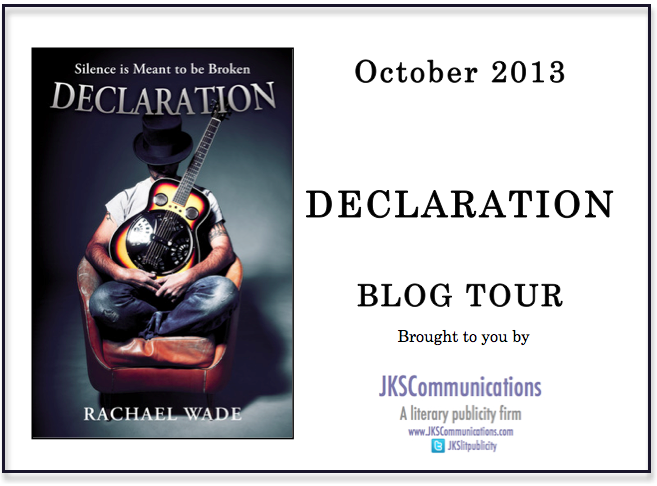 Carter is finally getting what he deserves...

Previous two days you could read my review for first two novels of the series - Preservation and Reservation. It is no secret that I'm not big fan of Kate and Ryan, but my hear broke because of that sweet tattooed boy, who plays guitar, has this crazy obsession with everything British and drops pretty much everything to be by the side of the his best friend when she needs him. Carter was my favorite character and I'm so happy that he got his book.

Apparently, Declaration combines characters from two different books - we have Carter from Preservation, and other guys from Love and Relativity. You can read it as standalone - it just happens in the same fictional world, there are some spoilers for mentioned books, but it's no big deal.

Why did I like it? Story was great - Carter decides to move across the country because he is sick of being second choice and he needs to get away from everyone and the life he was leading. I admire him for that because you have to be truly brave to do something like that - go to the place where you do not know anybody, without job or any plan what so ever. He just goes where life leads him. He finds new friends and new girl to obsess about - and she is worth of his attention, unlike Kate who, by my opinion always held him as back-up plan. Whitney is fun and outspoken, kind of a person you'd love to hang around. She and Carter are at first friends, but it is obvious that it can't stay just on that. Where Preservation disappointed me, Declaration was absolutely satisfying - those two have great chemistry. Their interaction is genuine and honest. I have few favorites scenes, but I don't want to spoil it for you so I'll just say this - beach bar. Don' worry, you'll get it.

But... It seems that most of the books that are written like this - connected trough same fictional world, few plot points and characters - there is this feeling like you're missing something. Yes, it could be read as standalone, but I think that I'd understand some things better if I had read Love and Relativity too.

One lucky winner will get all three e-books of Preservation series by Rachael Wade. You know what you have to do!;)