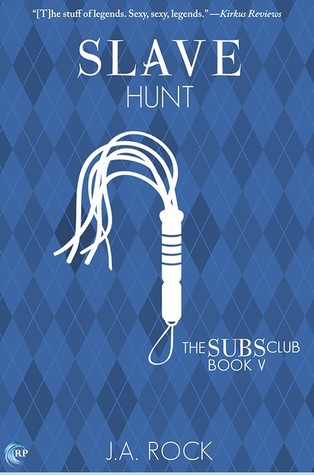 Thirty people. Two hours. Only the strong will survive.

When Riddle decides to put on a slave hunt, the Subs Club is on board. Tops hunting bottoms in the woods with paintball guns? Yes. Captives strung up on whipping posts, at the mercy of their captors? Hell yes. But on the morning of the hunt, nothing’s going according to plan. Miles and Drix are at odds over Miles’s reluctance to move in together. Dave is determined to show up D, who thinks Dave won’t last two minutes in the woods. Gould finds himself torn between obeying his master’s orders and living out a longtime fantasy. And Kamen inadvertently becomes a double agent when he aligns himself with two different parties.

By the end of the hunt, alliances will be forged and broken, loyalties will be tested, relationships will be strengthened…and someone will barrel roll. Narrated by ten different characters, Slave Hunt tells the story of two hours in the woods that will change everyone forever. Or at least, remind them that love is the greatest victory of all.

I wished for this all along.

I haven't written a review in a long time. It wasn't because the books I found the time to read didn't leave me with thoughts about them I would've liked to express, but because putting those thoughts into words proved to be a more difficult task than I remembered. Even if it was a book I loved reading like I did Slave Hunt. I'm rusty. I kind of just want to thank J.A. Rock for writing another story set in that universe and letting me have more precious pages with the characters who have become so dear to me, and say (in shouty caps, of course) that I LOVE THIS WHOLE SERIES, but because I love it so much, I feel I should say a few more words than that, so here goes nothing.

Slave Hunt is about, well, a slave hunt that Riddle organized in the woods on D's property. Tops were hunting bottoms with paintball guns, and the captured slaves were taken to whipping posts and were played with. All in good fun. Of course, the members of the Subs Club were there for the fun games. Except Miles -- he was there hoping to win gift cards. And over the course of that two-hour hunt I got what I hoped for ever since I finished 24/7, and that's to see how Dave, Miles, Kamen, and Gould were doing, what they were dealing with, and how far they'd come after the series sort of ended. Not only that, Maya, Drix, RYAN, Kel, Greg, and D got their own chapters, which made it even better. I wasn't sure how the ten different perspectives would work, but I soon realized that was silly of me. J.A. Rock knows what she's doing.

With some of the characters, I was happy to see a change in them, and with some, I was happy to see they're the same as I remembered them. Kamen falls in the latter category. He is a character who always cheered me up. Whenever I got to a chapter with his name, I started smiling, and didn't stop until it was over. Smiles and laughter are a given when it comes to Kamen. RYAN'S CHAPTERS ALSO MADE ME LAUGH. Kamen, Ryan, and Hemsworth -- it's always fun to read about them. Whether it involves manties, hot sauce or Kamen's ballads, fun is guaranteed.

Dave and D were interesting as per usual. I couldn't wait to read D's chapters to see what's in that man's head, and they were very D-like. This book revealed more of D's feelings, and it was so sweet. It gave me warm and fuzzy feelings reading about D expressing more of his feelings for Dave. I believe a perceptive vampyre played a role in encouraging D to be more verbal in his affection. Drix's interaction with D and the other characters were among my favorite parts of the book, especially the one with Gould. I was pleasantly surprised by how much I liked reading his chapters. Drix's other half, Miles, also needed some courage to express his wishes. He, however, gathered it after playing with someone else, and by the end even he had fun at the slave hunt. As did Gould, which I was incredibly glad for. His story was the most emotional one in the series, and this happier Gould was a welcome change.

It all ended with a very special ballad by Kamen, which is the only way it should have ended. Overall, Slave Hunt wrapped up the series in an even better way than I could have hoped, which only left me wanting more. So when the words Want more Subs Club? Sign up for This Rebus Does Not Work, a Lisa Henry and J.A. Rock newsletter, and receive a free collection of Subs Club short stories with your subscription. came into view, I was over the moon. J.A. Rock made my wish come true again. I've been keeping my eye on my inbox ever since.

My reviews of the previous installments: The Subs Club | Pain Slut | Manties in a Twist | 24/7