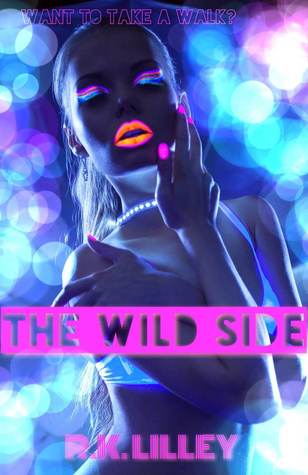 ARE YOU READY TO TAKE A WALK?

Alasdair Masters is in a rut. He just hit forty, has been nearly celibate for the past year, and his life has turned into a daily sequence of lonely patterns that revolve around avoiding human contact.

His tidy life is turned on its head when a hot young blonde at the gym that’s been pseudo-stalking him decides to rock his world. A very young blonde. Way, way too young for him. The problem is, he can’t seem to tell her no, and she just keeps coming back for more.

It doesn’t help that he’s ninety percent sure she’s a criminal, and still, he can’t seem to turn her down. What is a dull introvert to do when a chaotic cyclone that oozes sexuality comes twisting into his life?

"So if that dress was supposed to seduce me, what is that getup
you're wearing supposed to do?"
"Make you lose every ounce of good sense you ever had,
and take a walk on the wild side. Is it working?"

So, I read The Fault In Our Stars the other day, because I wanted to read the book before I see the movie. It's little to say that I was floored, awed, depressed & numb for a couple of days with no desire to read at all. Then I decided that the best way to erase those depressing thoughts out of my head would be with something kinky- I know, I know, my logic is deep, lol, but I made my peace with it long ago. In the meantime, I saw this book on GR a couple of times and read some praising reviews, read the blurb: older dude ft. young blond with big tits and decided that this should be kinky enough , right ;)?

She was young.
I was old.
She was wild. I was tame.
What on earth were we doing here?

And it was. The main character of the book is a hot & famous 40 year old writer Alasdair Masters who just got out from a bad divorce and is trying to get his life back on track. What's special about him except his sexy name? Well, the first thing I noticed about him right in the first couple of pages is that he isn't your typical erotic/ romance hero. Male characters are usually described as the ultimate alpha males: strong, possessive, dominant & cocky and at the beginning of the story Alasdair was nothing like that. On the contrary he seemed insecure, introvert and totally oblivious to his appeal and from time to time he...wait for it... he blushed! O.O

A good-looking and rich 40 year old acting like an insecure 15 year old girl??? I must admit, I have yet to meet that type of guy, BUT there's an important and justifying reason behind that which we find out later in the story, even though much later. It was refreshing to read about that type of male hero for a change, but still, his insecurities and naivety were also from time to time annoying. Just like in real life, I prefer my male heros to be strong persons, not like "caveman syndrome" strong, but he should be confident enough, and you especially expect that from a 40 year old guy who had enough time to develop as a person and figure out what he wants from life.

But wait, there's a solution for his little problem and it comes in form of a hot, young, mysterious blond called Iris who enters his life and turns it upside down. She is every man's wet dream, everybody wants her, but she has her eyes only for Alasdair and she isn't ashamed to get down and dirty to get his attention.

I knew I should have been more troubled by this,
because she presented herself as a wild thing,
and chaos and pragmatism weren't an easy alliance.
Not without motive.

Iris does everything to get under his skin and his bed, but who is she really and where does she come from and what's most important what does a girl like her really want from Alasdair? Read the book and find out. She was a fun character to read about, even though we find out little about her backgorund. She was "the predator" in their relationship and I loved how she made Alasdair blush with all the naughty proposals. The story was scorching hot and there were a lot of sex scenes. If I were to rate it only as erotica I would have probably given it 3.5-4 stars, but for the actual story, hm...probably around 2.5 stars, so 3 shaky & steamy stars sums it up. Let's face it, it was doomed right from the beginning, because how can anything be good after TFIOS, but it definitely help me "heal" ;).

"I'm  still way too old for you."
"Your cock doesn't agree."  Her tone was so innocent that
it took me a moment to process what she'd said.
I flushed bright red. "My cock doesn't know what's good for it."
"But I do."

All in all, it was a fun read. This will be a series and there was a cliffhanger at the end of the book, but a type of cliffhanger I could live with. I would recommend it to erotica lovers and readers who would like an easy and relaxing read mixed with a little kink.

Posted by PurpleBook at 4:39 PM