Honor Bound (Knights of the Board Room, #3) by Joey W. Hill 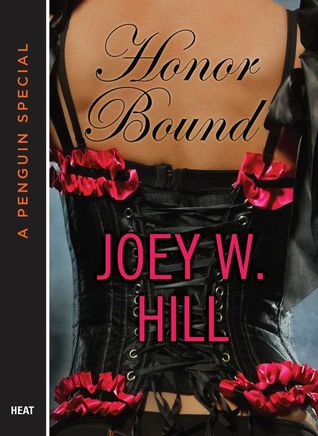 Army Sergeant Dana Smith doesn’t often seek the shelter of a man, but being Peter’s gives her a welcome sense of sanctuary. What begins as a night of fantastic pleasure becomes something they hope will never end. But duty calls, and it will be over a year before they can see each other again. And when they do, things have drastically changed.

Severely injured in the line of duty, Dana has lost her sight and her will to live. But Peter doesn’t accept defeat in business, battle or love. With the talents of the other K&A males, he’ll set the stage for another special night for them, knowing that only a submissive’s willingness to trust her Master will bring her back to love and life again.

Book three is about Peter Winston finding his one and only Dana Smith.

I tend to say about these knights that when they fall, they fall hard, and it was no different for Peter. In his case, one night was enough for him to realize he couldn't let Dana just go. The verdict was in pretty quickly: he had to make Dana his. It was simple as that. Problem was the night he spent playing with her in the club was just before he left for another tour in Afghanistan. Luckily for Peter, he had great friends who were willing to dig around and find out who the enchanting sub was.

It turned out she was being sent away on duty as well, but not before Peter made her promise to give him a fair shot after they were both back.

As much as Dana thought chances were slim at best they would be together upon their return, getting his letters always brightened her day... until the terrible accident that cost her her sight, most of her hearing, scarred her, and made her lose the will to live.

That is how Peter found her after his tour ended.

Convincing Dana he still wanted her, convincing her to let him help her, and ultimately convincing her they were meant for each other proved to be quite a task. But, honestly, with Peter and the other K&A men, she never really stood a chance.

This one was rather different from the previous books -- it was definitely much sadder, but that's wasn't all. In books 1 and 2, Matt and Lucas were on a mission to show Savannah and Cass they were natural submissives, submissives they loved. Dana was already well aware of her sexual nature. The mission at hand here was convincing that stubborn woman, who didn't want to feel like anyone's burden, who hated being helpless, that she was not any of that, but a desirable young woman who could be whatever she set her mind to, and for her to accept Peter as her Master.

Three days for that mission was all the K&A men needed.

These glimpses we get in each book about their friendship, and how it works, the code they follow, is something that fascinates me. I loved having another opportunity seeing them in team action. And another thing this book made me was to really look forward to Ben's book. Really look forward to it.