Play With Me (Pleasure Playground, #1) by Eliza Gayle 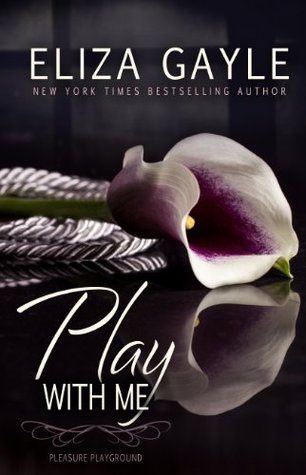 (Or if you were lucky to grab the Make Me: Twelve Tales of Dark Desire anthology, you can also find it there.)

Eve’s desperate denial only means one thing…she has a lot to learn.

As the receptionist at Altered Ego, the hottest fetish photography studio in the country, Eve Blake has seen what goes on behind closed doors. And she wants in, no matter what it takes. When a custom order comes up for a plus-sized red head, she volunteers for the job. Maybe pretending to be a sexual slave for Chase’s camera will finally get her noticed by the two men she thinks will understand even her darkest cravings.

Chase can’t believe he and Murphy agreed to this deal. Eve is their employee and they learned the hard way not to mix business with pleasure, no matter how sexy she is. Now Eve wants to play in a game she thinks is pretend and he can't stop thinking of their rope against her creamy flesh. But once they start, there's no turning back. They'll have to have her.

I've only read one other book by Eliza Gayle. It was the first part in the Purgatory series Roped, and this one reminded me of it quite a bit. Maybe it was because I've read Roped relatively recently, so it's still fresh in my mind, but when I started reading Play With Me, I thought that perhaps I was reading about the same characters from Roped, so much so that I went back to it to check the characters' names to see if they were the same. And, no, these were new characters in a new setting that just appeared a lot like the one in Roped. Still, to me this is like a extended version of Roped, which is perfectly fine with me, since I liked it as well.

Eve, the heroine, had the same appearance as Katie, and just like Katie she was very interested in the works of two Dominants that have a way with rope, because both Katie and Eve are very much into bondage. You could say the rope calls to them on a very deep level. But, both those women were rather hesitant in their pursuit of the Doms in their lives that could give them what they crave. Katie's history was left untold in Roped, since it was very short, but Eve's complicated life was revealed, and we got to see why it was so hard for her to let go of control, and why she needed to be restrained as much as she did.

Eve had been working for Chase and Murphy in their studio for a while, and all that time she admired their work fantasizing about being their model, so when the opportunity presented itself to be just that, she jumped at it. Thus began her journey of discovering her submissive side through very special and titillating photo sessions. Oh, and did I mention she also had the hots for both Chase and Murphy? 'Cause she did, which made the sessions much more enjoyable, especially when they made her feel beautiful and desired when she had doubts about them finding her body attractive. Kind of makes you wish for two lovely Doms of your own.

Like Leo and Quinn in Roped, Chase and Murphy worked together, lived together, and often played with subs together. There were parts from their point of views, too (although, mostly Chase's), so we got to see what was in their hearts and minds, and that no matter what Eve thought about their opinion about her, they were far from indifferent towards her. The problem was that the last time they took on a submissive together, they had some serious problems, which Chase was trying to avoid repeating at all cost.
You might say that while they were trying to get Eve to embrace her wants and needs, she did the same for them.

P.S. If you're interested in the short story Roped, it's free on Amazon and Kobo, and it's a really nice story.