Controlled Response (Knights of the Board Room, #2) by Joey W. Hill 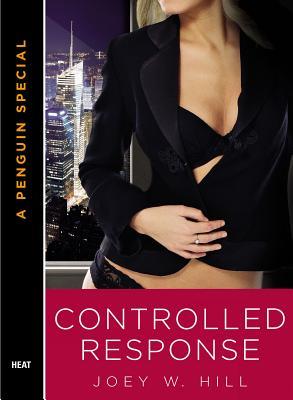 Bestselling author Joey W. Hill presents a tale of two strangers united by an unbound passion from their dreams. But what will hold them together once the fantasy ends?

Lucas Adler has recently realized he wants more from a relationship than just fantastic sex. But while on a cycling trip through the Berkshires, he encounters a beautiful blonde in the woods. Dressed in only white silk panties and a matching corset, she's stretched out on the back of a motorcycle and revving her engine--just not the one on the bike. Although he wonders if he can have the fantasy and the reality, Lucas is certain of one thing. He wants her...

Cassandra Moira wants to relax. Things are crazy back home, and the deal she just tied down has unraveled. So when an opportunity comes along to hop on a motorcycle and take in some scenery, Cass takes it. Stopping to rest and reflect, she remembers the weak men she's dealt with in her life. So she closes her eyes and imagines a man who can take charge. A man, who with the blink of an eye, is right in front of her...

After their encounter, Cass enters Lucas's life again. This time, she's part of a negotiating team on a three-day business deal. She's also not about to let any man control her. Now Lucas must use every strategy he knows to prove his love before she's gone from his life again.

In Controlled Response, another Knight was hit by Cupid's arrow: Lucas Adler, CFO of Kensington & Associates, and, as we learned from Board Resolution, the Knight of the Board Room with a mouth well-versed in giving women pleasure.

Lucas was ready for more. Seeing how Savannah and Matt were happy in their marriage, had made Lucas want something more serious and meaningful for himself.

Even a month after that brief encounter, Lucas couldn't get that mysterious woman out of his head, so when she walked in their board room, it was time to make sure she became his.
It was time for the Knights to join their forces again, and work their magic on yet another woman.


„The strongest women in the world have the hardest time surrendering. They don't realize when they do it with the right man, the one who cherishes them, it's the most beautiful gift she could ever give him. Her trust. Trust me, Cass, and do as I say.“

Besides the romance, it was nice reading about the men together in a more relaxed situation and about them teasing each other. You gotta love the banter between them. But most of all, to see the loyalty and friendship they share. After all, they aren't known as Knights of the Board Room for nothing.

Lucas really did remind me a lot of a knight in shining armor coming to the rescue of the damsel in distress, whether she wanted him to or not. Cassandra, the damsel, was a strong, smart, successful woman, who had dedicated her life to her family, but still she seemed in a need of rescuing.


„Life sucks sometimes, and you need someone who can stand with you. Everyone needs that.“


Now, I'm not a big fan of these couples that after only a few days together start professing their undying love, because I just find it unrealistic, but Lucas made me believe him. Well, he didn't profess his undying love, but he was very determined to make Cassandra his in only two days, and make her make him a part of her life. Even with that previous encounter, everything seemed to be happening very fast, but I guess when you know, you know. Isn't that right, Lucas?