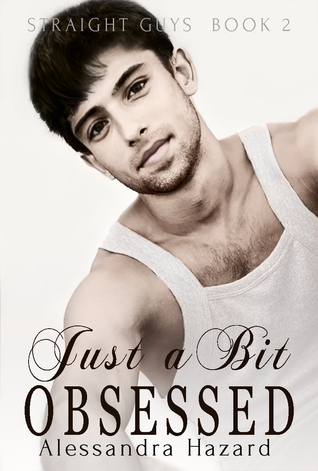 But what starts as animosity turns into something else. Something unexpected and very wrong.

It’s a recipe for disaster.

"Crushing on straight guys is never a good idea."

For the love of...I don't know which one was hotter- this one or the first one! My dirty mind simply can't force himself to choose and calls it a a tie, lol.

I knew from the first time I met Christian, Shawn's bff, in Just a Bit Twisted (Straight Guys, #1) that his story is bound to be good. Christian is a mix of everything I prefer my main characters to be: strong, witty, sweet and a bit cocky, but in a totally cute and harmless way. It's no wonder that he's one of the most popular students on the university and that everyone wants to be his friend or lover. He is a bisexual, but in the long term relationship he can only see himself with a guy and here comes Alexander Sheldon, the guy who's been on his mind for a long time.

Alexander Sheldon comes across as mysterious, calm, kind of closed off and cold person, especially to the people he doesn't know. Rich, drop dead gorgeous with a beautiful girlfriend Mila he treats like a queen. Everything about him and what he does seems perfect. Almost too perfect. Nothing and no one seems to have it in them to break that cool composure, that constant poker face. No one until he meets Christian.

Mila- I'm usually all for girl power and all that represents, but this time, I don't know if it's the mm fangirl in me to blame, but I didn't like this girl from the page one. I thought she was manipulative, selfish and full of herself and I wanted her out of the picture as soon as possible. Everything that happened- she had it coming.

I devoured this book in one sitting just like the previous one. The chemistry between the characters was breathtaking, but, sexy time aside, there's more to the story than just that. It's above all a story about love, friendship and family issues with fun, realistic and endearing characters.

And the ending? All I'm going to say is that it was all I wanted and more. Loved it! It's like the author read my mind and I think that every mm romance fan will be more than pleased.

"I hate leaving loose ends," Christian said.
"What loose ends?"
"You know what I'm talking about. Look at me."
Alexander knew he shouldn't. He knew it. But he did anyway.
They stared at each other in silence; the only sound in the stairwell was their ragged breathing. Christian licked his lips.
"Just once," he whispered.

Recommended to all mm romance fans who share my weaknesses for:
- emotional & steamy gfy (gay for you) mm romance with endearing characters
- collage boys romance

The next book is called Just a Bit Unhealthy (Straight Guys, #3) with Jared, Aleksander's cousin, in the main role who is still kind of an enigma. Can't wait to see what else Alessandra Hazard has in store for us!

Posted by Anonymous at 3:44 PM