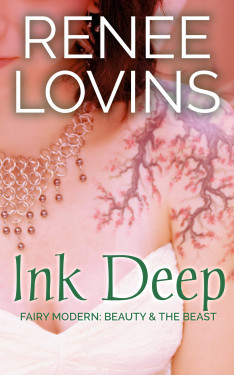 Most of Briony Carmichael's body was tragically burned as a child. Deeply hurt by the reactions of those closest to her, Briony believes her scars render her unlovable. She hides in her apartment, secluding herself from the outside world.

Tattoo artist Corbin Franklin has everything - including a brain tumor that will kill him. Determined to not let his art die with him, he seeks someone to become his living legacy, a walking canvas for his art.

Drawn in by the idea of having her scars covered with beauty, Briony enters Corbin's studio and changes both their lives. However, when concerned loved ones interfere in their blossoming romance, the resulting chaos could cost them everything.

Author's Note: In this reimagined version of Beauty and the Beast, readers should expect a happy ending that doesn't follow a HEA as expected in a traditional romance."


The thing that attracted me the most to this book is the author's note stating that this is  a "reimagined version of Beauty and the Beast, readers should expect a happy ending that doesn't follow a HEA as expected in a traditional romance." Add to that the intriguing description of the main characters: a scarred girl and a tattoo artist with a brain tumor and I was an instant goner. The book's synopsis sounded as a perfect recipe for a dark and bitter-sweet read - my favorite type.

Why it didn't work out for me:

~ The romance between the MCs wasn't believable enough in my opinion. It was slow-building to some degree, but considering the characters and their issues I felt that they needed more time together for the romance to develop. I didn't feel any deeper connection or chemistry between them and that was my biggest problem.

~ In spite of my weakness for tattoo artists I didn't like the main male character Corvin. He came across as a selfish and pompous ass through most of the book and I considered his desire to leave his living "legacy" and the contract he made for Briony ridiculous and incredulous.

~ When it comes to the ending- I thought that it was rushed and anticlimactic. It left me feeling quite neutral.

~ Briony as a main character was in fact quite interesting and her story won't leave anyone indifferent for sure. Most of the books lately feature drop-dead gorgeous and wealthy characters which tends to become annoying for me, so to read about someone totally opposite - someone with deep physical and both mental scars was refreshing for a change.

The story had some interesting parts, but all in all it failed to move me. Considering all the books I read before in my honest opinion I don't feel it deserves higher rating.

Posted by PurpleBook at 2:53 PM