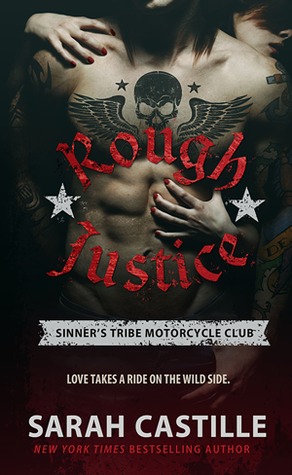 "From bestselling author Sarah Castille comes a scorching new series featuring red-hot, hard-riding bikers and the women who can’t help but love them…

IT TAKES A GOOD, STRONG WOMAN

Raised in a motorcycle gang, tough, beautiful Arianne Hunter has always dreamed of a normal life. But no sooner does she escape her father’s domineering grasp than she wakes up to find herself in a rival gang’s clubhouse—at the mercy of the dangerously sexy Jagger Knight.

TO TAME A MAN WHO’S HELL ON WHEELS.

The alpha leader of the notorious Sinner’s Tribe, Jagger Knight is all muscle, all biker, and all man. But somewhere inside this hard tattooed outlaw, Arianne senses a kindred spirit—and she can’t ignore their tempestuous attraction. Can she beat him at his own game in a revved-up blaze of glory? Or will their passion spark a war that’s the end of the road for them both?"


Rough Justice is the first book in Sarah Castille new series, Sinner's Tribe Motorcycle Club, and I believe that fans of tamer fictional versions of this violent subculture would enjoy reading it.

What can you expect? Instant love, bad boys with strong sense of what is right and what is wrong, a lot of steamy scenes, usual rivalry between clubs and few hours in the company of fictional men who are, as someone put it cleverly, "God's apology for men in real life". Unlike many other novels in this genre, Rough Justice is still more similar to "regular" romances with edgier twist, despite occasional scenes of violence. Sinner's Tribe is on kindergarten level compared to Sons of Anarchy or Hell's Horseman. This can be either a good or a bad thing, depending of what you like when it comes to this type of the stories.

Fairy tale about big, bad bikers. This would be the easiest way to describe new book by Sarah Castille. We are constantly reminded that they are "dominant club", that they are criminals and bad men, ex-military or something like that, but mostly it's just a talk. Personally, I couldn't get them seriously because I had a feeling that they were a kids playing bad buys with plastic guns. Or is it that I just have certain expectations based on books written by Lili St. Germain and Madeline Sheehan?

But the romance was really sweet. And hot. Two people that should be enemies falling in love? Strong female character that holds her own? Man who is willing to risk everything because of woman he cares about? If your answer is yes to everything above, you should definitely read Rough Justice because it has it all. One thing that I have to admit is that Sarah Castille can write a panties-melting steamy scenes. Oh, boy... Prepare yourself.

Final judgement? Great start to the new series that will appeal even to the readers who are not such a big fans of the usual MC romance novels.

*ARC provided by publisher in exchange for an honest review.*