Taboo For You by Anyta Sunday 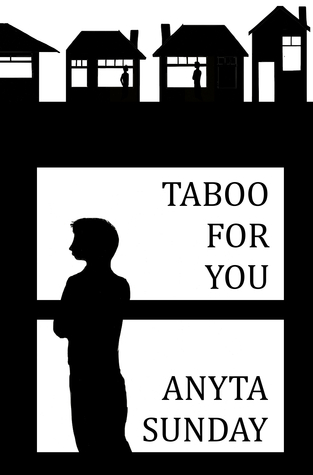 Sam’s freaking out. He’s 30 in three weeks. And what has he done in his twenties? It’s pretty simple math: nothing exciting at all. But hey, he has three weeks right? Maybe that’s just enough time to tick his way through a 20s Must Do List . . .

Luke’s freaking screwed. He’s come out to his family, and his friends. Except there’s a certain someone who doesn’t know yet: his neighbor of 7 years. Who also happens to be his best friend. Who Luke needs to tell the truth, but he just . . . can’t . . . seem to . . .

Jeremy’s freaking over-the-moon. It’s the countdown to his 15th birthday, and his goal is simple. No matter what, he’s going to spend heaps of time with saucy Suzy. But first he needs to get his over-protective, no-girlfriend-'cause-you’ll-get-her-pregnant parents off his back. And what better way than pretending he’s gay?

Sam, Luke, and Jeremy. Three guys who have a lot of history together, and a lot of future too—
—well, if they can sort out their issues, that is.

A Friends to Lovers Novel

"The saying goes something along the lines of; you don't know what you've got until you've lost it."

And this is how you write a beautiful, fun, deeply emotional & heart-warming BFFs-to-lovers/GFY mm romance! Don't be fooled by the title or my tendency to read dark & kinky reads ;P, because this is not one of those. The only thing referred here as taboo is the sexual relationship between two guys, so if you aren't one of those people who consider homosexuality taboo, calm down your dirty minds, because the title is quite misleading.

It is told from 3 point of views: Luke's, Sam's & Jeremy's who are the main characters. Luke and Sam have been neighbors and best friends for the last seven years and Jeremy is Sam's son whom he got when only 15 years old. In 3 weeks Sam is turning 30 and he is, to put it mildly- freaking out. He feels as if his life has been fast-forwarding since the birth of his son and that he had to grow up quickly and therefore didn't experience the things people in their 20s normally do, so he decides to write a 20s Must-Do List with things that he must accomplish before his 30th birthday and one of those is: Do something sexually taboo.

Luke has always been there for Sam and Jeremy whether financially or just as a friend and when he accidentally finds about Sam's 20's Must-Do-it list knowing how much Sam sacrificed after becoming a father so early in his life all he wants is to help him to cross everything from it, especially the taboo part, because what Sam doesn't know is that he's been secretly in love with him and there's nothing that could make him happier than Sam loving him back. But there are two big problems: Sam is straight and he doesn't even know that Luke is gay. Everything starts with a game called Taboo, but in every game you have to be prepared to win or lose and in a game where love and friendship are at stake, the risk of losing might be too high.

I knew that this story will be something special right after I read the first three chapters where the 3 main povs start to exchange. After the third chapter or to be more exact- Luke's pov I started to slowly fall in love with it and Luke became and remained my favorite character til' the very last page. He was just so charming, compassionate and selfless, an amazing and admirable friend to Sam and Jeremy that it was so easy to love him. People like that deserve happiness and I wanted so bad for Sam to finally see how great are they together, but nothing in life comes easy, especially not love.

"The idea of experimenting is to find out a truth of some sort. The experiment I just did with you points to a conclusion of sorts, does it not? But the real question here is: what do you draw from your experimenting with Luke?"
The floor gives way under my feet.
And this time, I just keep falling.

Sam was also endearing in spite of his stubbornness to see what's right in front of him. He put everything on hold (education, social and love life etc.) when he became a father, got a low-paid job and worked double shifts just to be able to take care for his son and when only 15 years old. That's why I totally understood his need to do a 20s Must-Do list (even if some things on that list were quite hilarious), because if I at 26, who had it much easier than him and went through most of the things people in their 20s do so far, still feel as a bit childish and as if I still have so much to see and experience, I can't imagine how frustrated a person who had to grow up so young must feel.

Jeremy was the funniest of them three. He's a great kid, but he's also at the age of 15 when his hormones are going crazy and when he only has mischief and sex on mind. We get the ya part of the story through his pov where we are introduced in the life of a young teenage boy and he's also a type of bystander who gives us more idea what's been going on between Luke & Sam. And the Golden Condom Rule his mom and dad made him practice weekly was hilarious! Poor kid.

"She needs bi-weekly proof I haven't suddenly and magically forgotten the Golden Condom Rule. When it's time to take the condom off the banana, I can feel her staring, making sure I do it right. I have to hold the rim tightly and carefully slide it off, tie it in a knot and trash it in the bin. So, yeah, there's is a reason I don't eat bananas anymore."


This story is so much more from doing "the taboo". It explores the themes of family, friendship, (homo)sexuality and love in general and most of the time in a fairy-tale-alike way which is maybe its biggest virtue and both its biggest flaw if you are a reader who prefers more realistic setting. The only thing that prevented me from rating it full 5 stars is exactly that realistic line in me which considered some developments of the plot considering the cruelty and the dumbness of the world around us as too good to be true (I'm sorry, I can't help it), but at the same time there's also a part of me who is a big dreamer who doesn't lose hope and who thinks that the world is slowly, step by step, getting there. The story made that part of me so happy.

The last page will make you wanna hug your mum and dad, boyfriend or husband. It is wonderfully put together and it's noticeable how much time, effort and thought is put in every detail. I highly recommend it to every MM romance fan out there, especially those whose guilty pleasures are mm reads with friends-to-lovers/gfy theme. It will put a never-ending smile on your face.

"When I take you to our bed, when we explore each other bodies, when we make love, or have sex, or just plain fuck, it never was and never will be taboo for me. It'll never be a sin. It'll just be us, and that's just right."

Posted by PurpleBook at 1:10 PM