Slow Burn by Sam B. Morgan 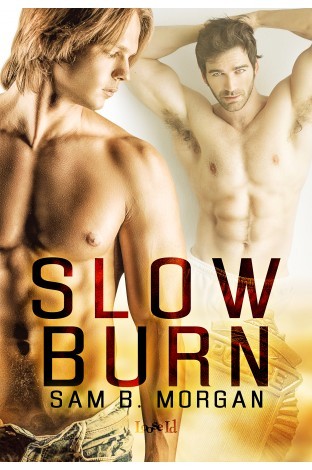 Detective Douglas Brody has only ever known the life of a cop. Raised strict but fair by his police chief father, he joined the academy right out of school, climbed the ranks hard and fast, and now works homicide for the City of Charleston. The job is his entire life. For years it’s kept him happy enough to minimize the side of him that craves what he believes is wrong. An accident on the job puts him on medical leave and everything in Brody’s world changes. He has to prove himself once more to be best cop in the department, all while dealing with Zack – his persistent, sexy, and out of the closet physical therapist.

Zack is tan skin, big grins, floppy hair and tackles his job with the same full-blown enthusiasm he does everything else. When the “patient from hell” is thrown his way by another PT who can’t handle him, Zack is committed to achieving the impossible. His new patient is a head strong and hot as hell homicide detective, who oozes as much resentment as he does sex appeal. Any involvement with a patient, especially a man who is so deep in the closet he can’t see light, is something Zack swore he’d never do. But Brody slowly proves too much to resist…

My last few f-m books were kind of disappointing, so I decided to seek consolation in the mm genre. I chose this book, because the title and cover looked pretty convincing, don't you think? And I can't say the fact that men in uniform where involved again wasn't helpful ;). It is my first mm read by Sam B. Morgan and I'm happy (and relived) to say that I liked it and then some.

3.5 slow-burning, but, oh, so good stars. The title is indeed perfect for this book, because from the moment the two MCs met, their working relationship starts slowly, but deliciously burning to something more.

Brody is a homicide detective, a man of action who can be pretty intimidating. He really doesn't do sick well making him a real pain in the ass or better say "patient from hell" for every physical therapist trying to help him with his recent knee injury. He becomes especially cranky when he gets for his next PT a full-blown enthusiast Zack and it has nothing to do with Zack's enthusiasm. Zack doesn't get intimidated so easily, as the matter of fact he is more than determined to get Brody in the best shape of his life, if only he wasn't so distracted by his hot body  while at it.

"Physically attractive was one thing. Zack saw good-looking men every day, and, while awesome to look at, it wasn't everything. A hot bod, even one like Brody's, wasn't unusual in his line of work or out on the beach. But attractive and dedicated? Unexpectedly funny and dedicated to his work?
Brody was a potent and dangerous drink."

One guy is deeply in the closet and doesn't do relationships, the other is long out of the closet and super outgoing who wants more than a roll in the sheets. How can they make this, whatever it is, work? As I already said- the relationship between the MCs was the best kind of slow-building, push & pull relationships and I liked it a lot. They start as doctor and patient, soon become friends and then grow to something more, both of them are afraid to label. They were very likable as MCs, especially Zack, while Brody was more one of those mysterious and hard to get types. The chemistry between them was scorching and between the sheets they were explosive. There is some drama and angst in-between, but it was rather light.

While witnessing the development of the romance we also get as a side, suspenseful story one of Brody's biggest cases "The Strangler". I must admit that the romance kind of put this part of the story in shade for me and that I was more interested in them two together than Brody trying to solve the biggest case of his life. That's why 3.5 stars.

For all mm fans: If you want a fast-paced, suspenseful, sexy and light on the drama mm read with men in uniform as leading characters- try this!

Posted by Anonymous at 2:52 PM