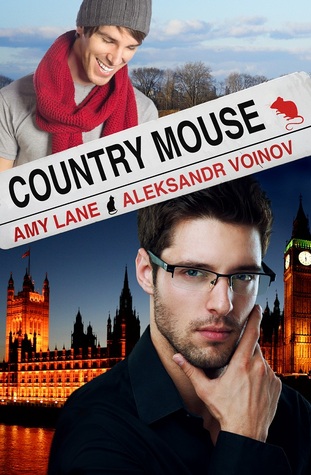 Owen may be a bit of a country mouse, but he's loving his vacation in London. After a long day playing tourist, he's on the hunt for some cheap beer and a good burger. Instead he finds a man hunting him, an arrogant prick with only one thing on the brain: the kind of meat that doesn't come on a bun.

Eighty-hour weeks at a trading desk don't leave Malcolm Kavanagh much time for meaningful relationships. Besides, in his world, everything's a competition-even sex. When his newest one-night-sub fails to show, Malcolm sets his sights on the pretty young Yank on the bar stool beside him.

Owen's all for an adventure with a native, but he's not the pushover Malcolm thinks he is, and Malcolm's not as shallow as he tries to be. They both soon learn that nothing's too intimate to share with a stranger, and the strangest things happen when two people share the most important pieces of their hearts.

A lovely beginning of a romance in London between a Brit and a Yank that made me smile, laugh, and go

many times. Malcolm and Owen do have that effect.

Reading hasn't been going great for me lately; thinking about real life related things has been distracting me too much, and if that wasn't enough, I've been clueless as to what I want to read. Normally, I know what I'm in the mood for, but that's not been the case lately. After starting and abandoning several books, I finally I decided on Country Mouse, which was lucky for me because Malcolm and Owen were so much fun from the very start. Abandoning them, too, never crossed my mind.


And here's what happened: Owen came to London as a tourist with his ex-girlfriend, went to a bar, drank ugly tasting beer, and met a bossy, arrogant British banker--Malcolm. Malcolm, who worked at a bank, and played Dom because it was easier to get laid that way, was tired of waiting for his latest sub, so he approached an American tourist instead. And thus began a life changing weekend. You see, the more they were together the more they didn't want to have to say goodbye so soon. Owen seemed to be the one more honest with himself, and more emotionally mature, while Malcolm, oh, sweet Malcolm, was finally acting like his true self, and admitting to having emotions. I can't tell you enough how much I enjoyed reading the parts where Owen really got to Malcolm. The big bad Dom was so cute!
Spanking of, I mean speaking of enjoyable parts, Owen and Malcolm did some kink together, and even that was fun. These two characters are a good combination. I can't wait to finish this review and dive into City Mouse, and see how the lovely couple is doing.


All in all, a sweet, fun, and hot first part of Malcolm and Owen's relationship.


I enjoyed the story as a whole, obviously, but there were a few details I particularly liked. The usage of the metric system is always welcome. I find it so rarely in the books I read, so I get oddly excited when I come across litres, metres, centimetres... and you get the picture.
The tidbits Malcolm shared with Owen about London were a nice addition.
As someone who wears glasses, Malcolm's troubles with adjusting to new visuals after taking off his glasses, the squinting, the new-found clarity after putting them back on were all too familiar. I feel for you, Malcolm. I really do.
And there was Josh. Is by any chance this Josh the same Josh from Return on Investment? *ponders*

However, there was one tiny thing I didn't like. They talked about carbs as if carbs were some evil. I don't like anyone talking bad about carbs. Carbs are delicious!

Now to the City Mouse.
XOXO