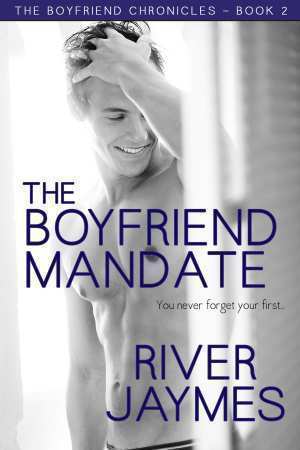 Stuntman and two-time cancer survivor Memphis Haines excels at beating the odds. When he’s presented with the opportunity to help his ex-boyfriend with a charity event, he jumps at the chance to make up for the devastating way he left Tyler ten years ago. Memphis might have taken the college geek’s virginity, but the former mathelete is now a hell of a head turner. And Dr. Tyler Hall’s cool reserve is a challenge Memphis can’t resist. A self-confessed rule breaker and line crosser, he keeps turning up the heat with one goal in mind: to melt the man’s composure.

Tyler Hall sticks to one simple mandate: no more dating ex-boyfriends. Ever. He certainly isn't interested in hooking up with Memphis Haines, the ex who jumps off buildings, dodges explosions, and poses for designer underwear ads. Ten years ago, falling for Memphis changed Tyler’s life. The man’s abrupt departure turned his world inside out. But he moved on long ago. Besides, he has a clinic for the homeless to run, patients to take care of, and no time to deal with the trouble his ex brings. Memphis, however, seems determined to rehash the past. And his boxer-dropping grin, hard body, and confident charm are resurrecting ultra-hot memories best not remembered, making Tyler’s rule harder and harder to keep...


The Backup Boyfriend (The Boyfriend Chronicles, #1) was one of the very good mm contemporary romances I read last years, so I was excited about reading the 2nd book in the series, even though Tyler, the MC, wasn't one of my favorite characters in the 1st book. He was actually kind of an asshole in that one as far as I remember, but I was curious to see if there's a more redeemable side to him, and fortunately- there was.


After his last break-up Tyler Hall is finally intent to stick to one relationship rule he kept on failing big time so far and that is: no more dating or giving 2nd, 3d, 4th etc. chances to his ex-boyfriends, but everything changes with the arrival of the one guy he could never forget, the guy who hurt him more than everyone else- his first boyfriend Memphis Haines. Memphis Haines, the famous stuntman and two-time cancer survivor is a champion at beating the odds, but there's one thing he failed big time when at collage. That thing is still on his mind and doesn't give him peace and that's Tyler Hall, the guy he left behind.

The One That (almost) Got Away stories are always a bittersweet pleasure to read. The first half of the story was almost perfect for me. The present and past events are mixed, so that we're given insight on how Tyler & Memphis first met, how they began dating and what led to their heart-breaking break-up. Their memories from past were so lovely and emotional that I loved those parts even more than the present. Those  parts also helped me to connect with and understand Tyler more and he slowly became my favorite character in this installment.

He was a totally different person from Tyler we met in the 1st book- sweet, funny and compassionate and it was impossible not to like him after we find out more about him. Memphis was also a likable MC. You can't, but to feel touched and sorry for him after hearing about his never-ending fight with cancer, but unlike Tyler, I found him at times full of himself. I'll explain the reason later on. We also get a sneak-a-peek in the lives of the secondary characters Dylan, Alec and Noah who was my 2nd favorite character. The story takes place 2 years after the 1st one, so there are a lot of changes in their lives, too.

The first half of the story made me wonder why most of my friends on Goodreads said that the 1st one was better than this one, because I felt completely different, but then came the second half of the story when my initial excitement started to lessen and I began to understand and agree with most of the mixed reviews about this installment.

The atmosphere between Dylan and Memphis in the present was full of tension. Their break-up wasn't pretty and there're lot of things left unsaid. While Tyler is determined to leave it that way and move on, Memphis is intent on making things good between them again, because if there's one thing he regrets doing, that's breaking up with Tyler. The reason how he decided to win Tyler's trust back again is exactly one of the biggest reasons why my initial excitement lessened.

I felt like Memphis, even though the reasons behind his decision to leave Tyler considering his condition were in a way justifiable and noble, later on used that same condition to win (read: make) Tyler forgive him and get back with him. He should have been more honest and try harder at winning him back and I definitely didn't appreciate how later on in one situation he went back back to his old ways. I also felt that, in a way, Tyler forgave him so easily for everything and broke his promise to himself. To be exact I think he should have make him work harder for it, because he deserved that. Plus, as many other readers, I was annoyed with the constant presence and possessiveness of Memphis' ex wife in the story. I wanted her out. That's why 3.5 stars.

All in all, I agree with other readers that the 1st book was slightly better than this one. I didn't end up obsessing over the story as I thought I would at first, but it was good, I liked it enough and I'm definitely going to read the 3d one which will be Noah's story- wohooo!

Posted by Anonymous at 5:52 PM