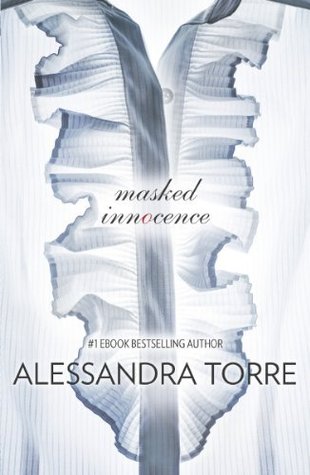 
The man was sinful. It wasn't just the looks that made him dangerous, it was the cocky confidence that dominated every move, every touch. And the frustrating yet ecstatic fact about the whole package was that he could back it all up…

Julia Campbell never knows what to expect with win-at-all-costs Brad De Luca. And she's starting to like it that way. She gave up safe, conventional relationships when she let the elite divorce attorney seduce her into his world. Now that he's determined to strip her naked of every inhibition, she's in danger of falling too deep and too fast.

But their affair begins to feel even more dangerous when a murder leaves a trail of suspicion that points straight to the mob…and Brad. Trusting a man with a bad reputation and a past full of secrets seems like a mistake. But when she's forced to make a choice, the consequences will take her further than she could ever have imagined.


To continue with the emoticon theme I had in my review for Blindfolded Innocence, my feelings towards Masked Innocence are best represented with:

Yes, fortunately, I enjoyed this installment much better than the previous one. Most of the issues I had with the characters and the story in book one were gone in this one, so I was able to read without wanting to slap, scratch or punch them, which was a relief, and a proof I was right to choose to continue with the series.

Julia was much more likeable. She's certainly come a long way from her annoying self that grated on my nerves in Blindfolded Innocence. This Julia was more like a lead female character I've come to expect in Alessandra Torre's books, and this change meant that the writing style was also to my liking, since the book is mostly written from Julia's perspective.

Brad, too, was more likeable. I have to admit, I completely warmed up to him. He seems to be a quite admirable human being. It's just that with all this, I'm having a hard time reconciling this image of Brad with the cheating, womanizing jerk from book one. The same goes with Julia. All of the information I got about them at the beginning just doesn't add up to what I've seen from them here. Anyway, that's just how I feel-- I could be terribly wrong.

The story in Masked Innocence took an unexpected turn. It all started with Julia and Brad enjoying themselves with each other, and with other other people, as a part of introducing Julia to the swinger lifestyle, and exploring what she would or wouldn't like. This part took up quite a chunk of the book, so at one point I started wondering if anything else would happen... And then it did. This part was a turn of events I never would have expected. If there were any hints to it, other than Brad being Italian, I missed them. I am still trying to wrap my mind around everything. I do hope it will all click in the last book.