ARC REVIEW: Counterpoint (Songs Of The Fallen, #1) by Rachel Haimowitz 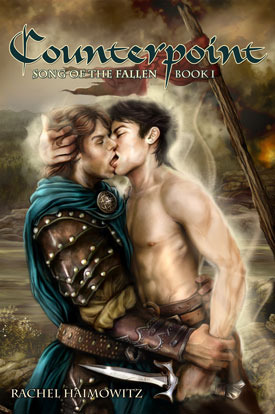 It is the twilight of mankind. Depleted by generations of war with a dark race, the human kingdoms and their ancient alliance stand on the brink of extinction. The outlands are soaked with the blood of the fallen. The midlands are rotting with decadence and despair.

Elfkind, estranged by past crimes, watches and waits for nature to run its course.

And then the two collide.

Ayden's life has long been guided by two emotions: love for his sister, and hatred of all things human. When he's captured in battle, he must for his sister's sake swallow his pride and endure slavery in the service of a human prince, Freyrik Farr.

Freyrik's always known elves to be beautiful and dangerous, but never has one affected him as deeply as Ayden. Can his life of service to his people leave room for this attraction? Dancing on a dagger's edge between duty and high treason, Freyrik discovers that some choices can change a life, and some an entire world.

Between prejudice, politics, pride, and survival, Ayden and Freyrik must carve a new path, no matter how daunting. For nothing less than the fate of both their peoples rests on the power of their perseverance and their love.

“All the world seemed suddenly dream, for in what waking world would a prince deceive his own people for the benefit of a slave?"

Ever since a little kid I had a huge crush on fantasy movies, shows and books and even now, 26 years later, that still hasn't changed. It's just that nowadays my preferences expanded, this time on mm genre. Elves/ fairies were always one of my favorite creatures of the fantasy world and that's why I just had to have this book. It's also my first mm book by Rachel Haimowitz in general and it was a fairly good start.

At the beginning of the story I was struggling a little, because we get thrown right away in the world of elves described in very good, but also at times a bit over-descriptive writing using some words I've never heard before considering that English is not my mother tongue and I actually thought that I will have to dig out my long forgotten English dictionary from collage, but fortunately, in the end, that wasn't necessary.

After a couple of pages I got sucked into this dark and magical world ruled by elves on one side of the border and humans on the other side who have been at each other throats for centuries. There's a lot of bad blood between these two species caused by a feud between their ancestors long time ago. While there was a time when they lived in peace side by side as neighbors, friends and lovers, nowadays they spend their days in bloodshed and wars.

The elves are portrayed as magical creatures with special powers and protectors of nature who feel and read the emotions of other beings through song. While I liked the way they and their world are portrayed I still wish that we found out more about their background, politics and the rest of this fantasy world and that there were less pages spent on war strategies which were a bit boring (I'm a girl after all!). The story was a bit lacking in the fantasy department.

One of the best things about this story is the slow building, forbidden (to the point that it was quite frustrating) hate-to-love relationship between the mcs: Ayden, the dark-haired elf, and Freyrik, the human prince. Ayden and his sister get captured by Freyrik's soldiers and end up being his slaves and that's how their story begins. Both, Ayden's and Freyrik's characters, were interesting enough. Freyrik is not your usual type of prince. He's kind, compassionate and loved among his people and soldiers. His reputation gets questioned after the arrival of the beautiful elf who turns his world upside down. Ayden is probably my favorite character. He is not perfect. In fact there are times when he behaved  like a little pompous bitch which was quite annoying and frustrating, but at the same time there's this witty, playful and endearing side of him showed through his love and protectiveness of his sister, animals and nature in general. I loved that about him.

It was lust at first sight for Freyrik and hate for Ayden (he did after all end up being his slave!), but after some time spent together and a handful of sexual frustration they'll realize that first impressions can be highly misleading. The story was dark, action-packed and fun with some steamy scenes in-between. And of course it had to end with a cliffie, damn it! Must read the 2nd one as soon as possible and find out will there be a HEA for Ayden and Freyrik! I recommend this series to mm fantasy fans who prefer when there's more focus on the romance part of the story than the fantasy itself.

Posted by PurpleBook at 5:04 PM