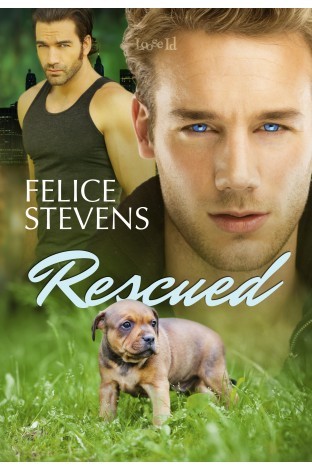 Ryder Daniels has spent the last year recovering from rejection: his parents couldn’t accept his sexuality and his lover chose drugs over his love. The only bright lights in his life are his younger brother and his rescued pit bull. But now his mother's punishment for his lifestyle has cut him off from his brother he loves so deeply. Devastated, he throws himself into the work of the Pit Bull Foundation he and his friends started.

Jason Mallory can no longer hide the dissatisfaction of his relationship with his longtime girlfriend. When her marriage ultimatum pushes him to break things off, he's determined not to jump into the dating scene. But when a group of injured pit bulls are found on his construction site, he can’t forget the guy who shows up to help.

After Jason adopts one of the dogs, he and Ryder become fast friends—until one night, Ryder lets down his guard and Jason recognizes his desire. Soon, they can’t deny the passion between them but will family differences and ugly prejudices keep them apart, or can they fight to prove that love is precious, no matter the flavor?

I didn't realize how being with the right person could change your world and your outlook on everything, but you have to know you rescued me from myself. You've made everything in my life so much better from the moment I saw you.

Adorable puppies, GFY mm romance, raving reviews of friends- I should have loved it, I know, but unfortunately, my feelings about this book are rather mixed. I had trouble even getting into the story at the beginning, mostly because the dialogues didn't have that natural, realistic flow, but more of that this-happens-only-in-a-book flow, but then, after a few chapters the story started to get better and better.

The main reason for that is the sweet, slow-building friends-to-lovers/ GFY relationship between the MCs- Jason & Ryder. Their story begins after Jason adopts one of the dogs Ryder rescued and took to the animal center where he is working along with his two best friends. Their love for animals is what brought them together, but there's also palpable, scorching chemistry since the moment they laid their eyes on each other with one big problem: Jason is straight. Or is he really? Of course he's not, since this is a mm romance book and we all are turning pages and eagerly waiting for that moment when he finally gives in to his secret, deep-buried desires. I'm addictive when it comes to these gay-for-you mm stories, that's indisputable.

My level of tolerance of cheesy lines is getting lower and lower with every next book. This book had some of those, not too much, but still enough for me to roll my eyes a couple of times. I suck at romance, I know. What can I say in my defense is that I prefer deeds, not words when it comes to relationships and romance. If they had been together for a few years I could take it, but to proclaim such deep feelings at the beginning of the relationship- nope, not my thing. There were also some light, not enough developed dramatic situations which solved in the most convenient ways, but those ways were pretty smoking hot, so I didn't mind the drama that much, lol.

All in all, the book had its good and not so good moments. If you are mm romance fan who wants to read a sweet, light & emotional GFY mm romance and have a bigger tolerance for some cheesy content than me, then you should definitely give it a try!