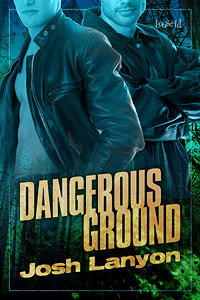 Special Agents for the Department of Diplomatic Security, Taylor MacAllister and Will Brandt have been partners and best friends for three years, but everything changed the night Taylor admitted the truth about his feelings for Will. And when Taylor was shot a few hours later, Will felt his reluctance to get involved was vindicated. For Will, the team and the friendship have to come first--despite the fact that he hasn't failed to notice just how...hot Taylor is.

Taylor has been in love with his partner and best friend since they were first partnered. There isn't much he wouldn't do for Will--but he doesn't know how much longer they can stay teamed feeling the way he does. Still, he agreed to a camping trip in the High Sierras--despite the fact that he hates camping--because Will wanted a chance to save their partnership.

But the trip is a disaster from the first, and things rapidly go from bad to worse when they find a crashed plane and a couple of million dollars in stolen money. With a trio of murderous robbers trailing them, Will and Taylor are on dangerous ground, fighting for their partnership, their passion...and their lives.

"I know not everything I want is possible."
"What do you want?" Will asked. His fingers brushed Taylor's cheek,
feeling the softness of beard over the hard planes of jaw.
"Besides getting out of here alive." Taylor didn't speak for a moment.
"I want you," he said at last.

Here we have 2 smoking hot, bad-ass special agents Taylor & Will who have become the best friends since the moment they first partnered. There's no one out there who knows Taylor better than Will and the other way around. Their friendship is so strong that nothing can become between them, but what when that's not enough anymore? What when one of them asks for more?

Both MCs were strong, witty, courageous and down-to-earth characters and I loved them together. Their friendship, the level of trust and love they have for each other is one one those enviable and inspiring kinds. To love someone so deep that you're willing to lay down your life for that person can't be anything, but true love. I loved how Taylor was willing to bare his soul to make Will understand that what they have is once in a life time thing and how Will didn't let Taylor put distance between them when fears and doubts hit. And when they finally let down their defenses and just gave in- it was magical.

I guess I was too invested in their relationship to be interested more in the mystery/crime part and the case they were handling. Those parts weren't bad, but I definitely enjoyed more the romance. That's why 3.5 stars, but I see potential for the next installments. And yes, ignore the publisher's note. There was steam, but only 2 sex scenes (and the 2nd doesn't really count, since there wasn't actual intercourse, right? :D)

The story was short (around 80 pages) and well-written. The elegant writing style of the author is one of its best features. It was my first read by Josh Lanyon, but it won't be the last and I will definitely continue with this series.  Recommended to mm fans who love a good mm crime romance and best-friends-to-lovers relationships.