PRE-RELEASE ARC REVIEW: A Taste For Poison by Aleksandr Voinov (Memory Of Scorpions, #3) 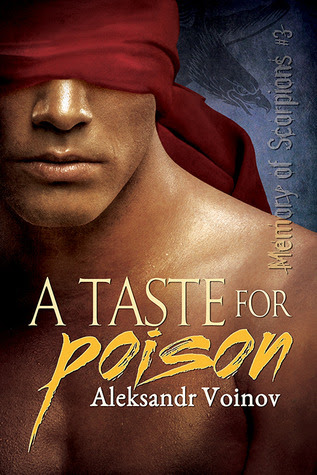 Even a king gets stung when he reaches for a scorpion.

After barely surviving an assassination attempt, King Adrastes is a changed man—one who mistrusts even his allies and friends. He readies his Empire for war against an enigmatic enemy, the Elder of Vededrin, but not everyone approves. While courtiers dare only to whisper dissent, an outrider called Death foments rebellion in the mountains, aided by a prophecy that promises he’ll stop the Black King.

Kendras—former lover to Adrastes and leader of the Scorpions—is sent with his elite mercenary force to bring Death to justice. But when Kendras learns who’s hiding behind the mask, he must choose between his lover Graukar, newly-appointed general to the king—and King Adrastes himself.

With no man to call master, the Scorpions could flee the danger and intrigue. But Kendras cannot abandon the man he once loved—or the man he’s growing to love—without first uncovering the real threat to the Empire.

"Even a king gets stung when he reaches for a scorpion."

After the epic finale of Lying With Scorpions (Memory Of Scorpions, #2) I was eagerly waiting to get my hands on this book.
- Is Adrastes going to make it?
- If he does, what will he do when he finally finds out about Kendras & Graukar?
- Will Scorpions accept Runner when they find out about her secret?
- Who is the new rebel called Death and why do I have the feeling it's *spoiler*?
- If the day comes when Kendras has to choose between his loyalty to Adrastes and Graukar- who will it be?

This 3d installment answers you all those questions. Without spoiling anything, all I'm going to say is that I think that the fans of this series will be more than pleased with the outcome.

Just like the 1st two books, I enjoyed this installment very much. It was like watching one good, action-packed, fantasy movie and I'm a big fan of those. The world and the characters the author created are complex, but amazing. The writing style was superb like always.

Why not 5 stars then? Well, the reason is pretty ridiculous. This was to me, let's just say, the tamest book of the series. Part of me felt that some situations concluded too smoothly considering the personalities of the characters involved, even though I liked the way those situations developed. Yes, I'm weird like that. There's no question that I liked this book a lot, but Lying With Scorpions, #2 remains my favorite in the series.

And the ending? My first reaction was a happy, pleased sigh, but then, after a minute, when I really thought about it, I was like :"Wait? Is this the ending? No, it can't be..." Then I read the last page again a couple of times and while it felt like a conclusion, I still couldn't believe that this is the last book, probably because I'm used to reading book series which, it seems, never end (yes, I'm talking about you BDBrotherhood & IADark :P) and above all I'm not ready to let go of this series yet, damn it!

I hoped for at least 2 more books. That's why I immediately went on web to check if there's any mention of possible 4th book and...there wasn't :@! Not on Goodreads, nor A. Voinov's blog, simply nada...but I wasn't going to give up, so I decided to ask the author himself, and here's what he replied:

First of all, you know I LOVE your books, but I'll try to spare you of my fangirling this time, so straight to the question: I read my arc of A Taste Of Poison recently and loved it, so I was wondering do you plan to write more books for this series, because I don't see any mention of 4th book here on GR? Thanks :)

Aleksandr Voinov Hi, Purple, thanks for the question! Glad you loved Taste - I love the whole series and I'm glad when people do, too. :)

Regarding the question, I have an idea for a novella dealing with Widow's past (how did he end up in the place we meet him), and I'd quite like to look at Adrastes's past in a novel. As for Kendras, I'm never saying never, but those three novels are about as much as I have about him. :)
So, there you have it folks! Two more possible Scorpion stories- Widow's and Adrastes's. Both, Adrastes & Widow are very intriguing characters and I would definitely love to read those books, but at the same time I hope that this is not the last time we read about Kendras, Graukar, Shadow and the rest of the Scorpions *fingers crossed.*

All in all, this is one of my favorite mm fantasy series and one of favorite Voinov's book series in general. Highly recommended to all mm fantasy fans, fans of shows and movies like Spartacus, 300: Rise Of An Empire etc. or fans of mm fantasy books like Captive Prince Series by C. S. Pacat.

Posted by PurpleBook at 8:13 AM