When homicide detective Dexter J. Daley’s testimony helps send his partner away for murder, the consequences—and the media frenzy—aren’t far behind. He soon finds himself sans boyfriend, sans friends, and, after an unpleasant encounter in a parking garage after the trial, he’s lucky he doesn’t find himself sans teeth. Dex fears he’ll get transferred from the Human Police Force’s Sixth Precinct, or worse, get dismissed. Instead, his adoptive father—a sergeant at the Therian-Human Intelligence Recon Defense Squadron otherwise known as the THIRDS—pulls a few strings, and Dex gets recruited as a Defense Agent.


Dex is determined to get his life back on track and eager to get started in his new job. But his first meeting with Team Leader Sloane Brodie, who also happens to be his new jaguar Therian partner, turns disastrous. When the team is called to investigate the murders of three HumaniTherian activists, it soon becomes clear to Dex that getting his partner and the rest of the tightknit team to accept him will be a lot harder than catching the killer—and every bit as dangerous.

Dex's earpiece flashed blue and Sloane
watched in amusement as Dex tapped it.
"You've reached the voice mail of Agent Dexter J. Daley.
I'm away from my desk at the moment having hot monkey sex
in the archive room with my partner Agent Sloane Brodie.
Please leave the message after the snarl."

Hi everyone! Come & meet one of my new favorite mm series- Therian-Human Intelligence Recon Defense Squadron a.k.a The THIRDS by Charlie Cochet. I didn't read anything by this author until this book, but I've heard only good things and now I can definitely confirm that she excels at her job when it comes to this series. I'm so hooked!

Am I in heaven? - my "subtle" reaction while reading. The only thing that would have made it better for me would be if it was a GFY romance, but even without that feature, I LOVED THIS BOOK so much!

The biggest reason for that, aside the genre, is the main character of this book=> the homicide detective Dexter J. Daley "Dex".  This guy managed to become one of my favorite characters ever in just a few pages- that says it all. Cocky, hot, hilarious, mischievous, witty, incorrigible dirty-talker & geek who is a little bit obsessed with the music of 80es. He almost made me pee my panties a couple of billion times. I barely made it, I swear. You just have to meet this guy to get what I'm saying. It's simply impossible not to love him.

Here's a little bit of his of his awesomeness:

"You...you're cool with that?"
"Yeah." Dex shrugged and smiled at him,
leaning with a wink. "I mean, I know
this is hard to resist." He swept a hand over his chest.
Sloane pressed his lips together in an obvious attempt
not to laugh, but in the end he gave in. "You're such an ass."
"What?" Dex asked innocently. "It's dangerous to have this much game."

"Hey, Dex." Dex shifted his gaze to Ash,
his smile pleasant. "Simba."
Ash looked unimpressed. "I should pull the plug.
Put you out of your misery."
Dex: "You don't need to pull the plug for that,
just cover your face..."

"I can get you a framed painting if you like. Or you could suck it."

Then we have his almost as awesome love interest Sloane Brodie, the jaguar shifter & the bad-ass team leader of the THIRDS, an organisation which deals with criminal among shifters. Sloane is this mysterious, tough, grumpy & way too hot bad-ass Thirds soldier who gets partnered with Dex after the death of his former partner and you can already guess that he isn't happy about that at all. Well, at least at the beginning. Because, let's be honest, who could manage to resist the charm of Dex Daley for real? No one. That's indisputable.

The chemistry between these two was smoking, but they both have issues and a rough past which keeps coming between them, plus there's this stupid rule of the Thirds organisation that says: thou shalt not get involved with your partners. For real?  Yup, stupid, stupid rule. But it's no fun if you don't break a couple of rules in the way, is it ;)?

The paranormal part of the story was action-packed & interesting. There's a serial killer in the shifter world and Thirds get called to solve the case. That's all I'm gonna say about the story. Aside MCs Dex & Sloane there is also a lot of other awesome secondary characters (Cael, Calvin, Maddock, Rosa etc.) who made the book that much better. Just look at this awesome THIRDS casting made by the author herself *_*:

I say *hell yeah*  to every casting, especially Sloane's- Joe Mangaiello *le sigh*, Ash's & Cael's, but I'm still undecided about Chris Pine as Dex. No one good enough comes to my mind who would be suitable enough to play that adorable guy.

Either way, I highly recommend this new mm series to every mm lover out there! Give it a chance, you won't regret it, I promise. I didn't even manage to finish the 1st book without ordering the second one. Review follows. 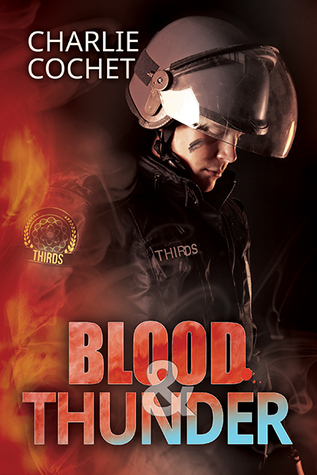 When a series of bombs go off in a Therian youth center, injuring members of THIRDS Team Destructive Delta, and causing a rift between agents Dexter J. Daley and Sloane Brodie, peace seems unattainable. Especially when a new and frightening group, the Order of Adrasteia, appears to always be a step ahead. With panic and intolerance spreading and streets becoming littered with the Order’s propaganda, hostility between Humans and Therians grows daily. Dex and Sloane, along with the rest of the team, are determined to take down the Order and restore peace, not to mention settle a personal score. But the deeper the team investigates the bombings, the more they believe there’s a more sinister motive than a desire to shed blood and spread chaos.

Discovering the frightful truth behind the Order’s intent forces Sloane to confront secrets from a past he thought he’d left behind for good, a past that could not only destroy him and his career, but also the reputation of the organization that made him all he is today. Now more than ever, Dex and Sloane need each other, and, along with trust, the strength of their bond will mean the difference between justice and all-out war.

Charlie Cochet, thank you for writing this awesome new mm series and creating one of my favorite characters ever- Dexter J. Daley "Dex" a.k.a Rookie. I thought I loved the 1st book, but in that case I adored this one. Yup, it was that good! This is the new mm series that kept me awake for 3 days in a row. I barely slept at all, but I don't regret it.

The story picks up after the ending of the 1st book. The things I loved the most about this book, Dex's awesomeness aside, is the slow build-up relationship between him & Sloane and the building friendship between him & the rest of his team. Sloane & Dex are getting closer and closer, even though Sloane insist they keep it a secret and with no strings attached, but how to keep it that way when Dex keeps getting under his skin more and more everyday?

They were just so cute together, but I admit that from time to time I wanted to kick Sloane's frustrating ass because of his insecurities and doubts, but in the end I forgave him, because it was understandable that he would feel like that after everything he's been through. Dex was, of course, his usual awesome-self. Oh, I really love that guy. I was laughing like crazy at his hilarious jokes and snide remarks.


Here's another sneak-a-peek at his awesomeness:

"I'm not going to look at your ass, Daley. Not if you were the last fuckable guy on this planet."
Dex grinned widely: "So you're saying I'm fuckable?"

Yup, I definitely love this guy :).

Great news is that the author plans to write at least 6 books of this series as far as I've seen on Goodreads with the next book coming out in November 2014. The first four will be focused on Dex & Sloane as the main couple and the last two will be focused on another couple. Whom? Unfortunately, it's still unknown, but I give my vote to Cael & Ash <3. Oh, please Charlie, pretty please *puppie dog eyes.* I know Ash declares himself as straight, but he is acting not so staright when he's around Cael, don't you think? Oh my, it could be an epic GFY mm romance *_*! Be still my inner mm fangirl.

The paranormal part of the story was interesting and action-packed as usual. We get to find out more about Therian (shifter) society and the connection between Therians and their human partners in this book. I'm eagerly waiting for November 2014 to see what more the author has in store for us. This series definitely has a place on my top 5 reads of the summer. Highly recommend it to every mm fan. Read it!