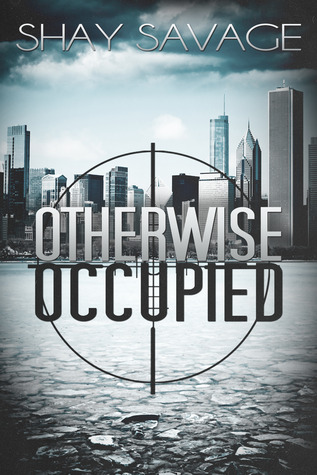 Get your copy:
Amazon / Barnes & Noble

Evan Arden is a hit man for a Chicago mob boss. He lives his life day to day with the company of his dog, Odin. He has to work hard to get back into his boss’s good graces, but the target proves to be difficult. As demons of his past begin to haunt him, he seeks the comfort of sleep from an unlikely candidate, but will confiding in her be his undoing?​

​He’s struggling to forget his past, and keep himself Otherwise Occupied.

“You are going to crack someday, aren’t you, Lieutenant?”

While I always try not to expect much from books, after the great introduction this series had, with this one I couldn't help it. Otherwise Alone was a very promising beginning. I couldn't not expect good things from Otherwise Occupied, and it did not disappoint. In fact, it exceeded my expectations.

After the first book I had some questions and ideas of how the story would go. I expected one hell of a ride, and I got it. Evan was back on his job as a hit man for the Chicago's mob boss, and trying to get into his good graces. Assassin is not on my list of favorite professions, and I have to admit there were a few scenes that made me queasy, mostly because even though Evan is a sniper, he had a few up close and personal hits, but other than that, I liked reading about how Evan fit in the organization. Dealing with the competition who wanted Evan out of the picture, carrying out orders from the boss, all made for a thrilling read.

What would happen with Lia was a big question on my mind. The answer to that I assume will have to wait until book three, but she was on Evan's mind a lot in this one. The little time they spent together kept replaying in his mind over and over again, followed by guilt of how he left. I'm not going to lie -- these were my favorite parts. What can I say, I'm a romantic.

While Lia was on Evan's mind, there was another woman in his bed. No matter how much I wanted Evan to find Lia, I couldn't mind him seeking out the company of a prostitute. He needed sleep free of nightmares, and she helped. I had even started to like her, and felt bad when Evan would be brutally honest with her about their relationship, and even worse about it how it ended. It definitely took me by surprise.

The most important part was getting to know Evan. All we got from book one were a few facts: ex-marine, hit man, dog owner. Otherwise Occupied provided a lot more information. What happened while he was a marine being the most important, because that time started haunting his dreams, making him unable to sleep, and the lack of sleep combined with everything else happening in his life at the time led to some unfortunate turn of events.
I mentioned expecting good things, but good things were not happening to Evan, which all led to one hell of an ending. Having book three at your disposal is recommended, because the cliffhanger was brutal.

“You are going to crack someday, aren’t you, Lieutenant?”
“Sure am”