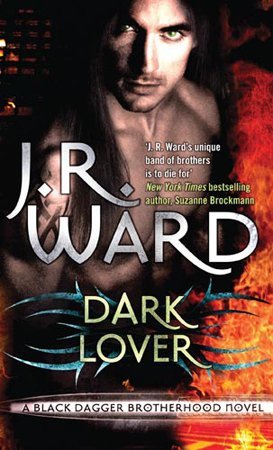 In the shadows of the night in Caldwell, New York, there's a deadly turf war going on between vampires and their slayers. There exists a secret band of brothers like no other-six vampire warriors, defenders of their race. Yet none of them relishes killing more than Wrath, the leader of The Black Dagger Brotherhood.

The only purebred vampire left on earth, Wrath has a score to settle with the slayers who murdered his parents centuries ago. But, when one of his most trusted fighters is killed-leaving his half-breed daughter unaware of his existence or her fate-Wrath must usher her into the world of the undead-a world of sensuality beyond her wildest dreams.


How did I make it to year 2014 without reading a single page from the Black Dagger Brotherhood? Really, how did I manage not to do that? Long story short, Buffy, the vampire slayer; J. R. Ward a man writing crime novels with vampires: BDB. This may not make sense, but it is the short version. The important part is that I'm no longer one of the few people in the world who have not read anything from this series.

I am still a rookie when it comes to vampire books. A rookie who isn't very eager to become an expert. However, after a little trip to the vampire world of one of my favorite writers Joey W. Hill, I had an itch to read more about vampires, and since this book has been on my list -- and my shelf -- for a very, very long time, I figured the time had finally come for me to read it.

I am glad I've read comments saying the books get better, because I wasn't exactly impressed with Dark Lover. It was first published in 2005, so I assume the author's writing style has evolved, and improved in the meantime. At least, I hope so. I did like how the author imagined the vampire world. I'm not sure I've grasped the concept completely, but I'm getting there. I liked the brothers, too, though I don't think I've memorized who's who, either. They all have such angry names, can you blame me for being confused? They do seem to be an interesting group, and most importantly, interesting characters for the sequels.

To be honest, the banter between the brothers, and later with Butch, and the parts with Butch and Marissa were my favorite. Fritz was a character I found the sweetest. I wish there was more of them, but what can you do... The rest was okay, I guess.

The blooming romance between Wrath and Beth was a major focus of the book, and sometimes I liked it, and other times not so much. Separate, I liked them a lot more, which is kind of weird, and not a good thing if what you're reading is a romance novel. They got too smoochy too fast. Hot, dirty, sweaty -- I don't mind. In fact, I encourage it, but smoochy -- not in front of me, please. Thank you! I do, however, look forward to seeing them in the next books. I think the role of king and queen will suit them, especially Wrath.

In the past few years I have gotten used to reading books written from either one POV or two, occasionally three, so reading this book with I don't even know how many POVs was quite a change, and sometimes it was a little difficult for me to follow everything. If I'm being totally honest, I'd say there were a few story lines that could have been edited out of the book without losing anything important. The parts with Mr. X were creepy to me. And that name makes me think he's some villain from a James Bond movie. As a villain he had some great evil plans, but in the end it was rather anticlimactic. I'd say the parts with Butch and Marissa were unnecessary, too, but I liked them too much together to complain about that, but Havers' -- I did not see the need for it. Not in a book, anyway. In a movie or TV series, I think it would have worked better. Which brings me to the writing style. When I find a book written in this manner, I always think I'd rather watch it on TV than read it, because I didn't get much more from the book than I would have had I watched it on screen. The book didn't delve deep into the emotional state of the characters. It was focused on what was happening and what was being said. I was a little disappointed by this.

However, even with all of my complaints, I'd still like to find out what happens next. Do I want to dive into the next book right away? No. I'm not that impatient. But someday I will. I think.