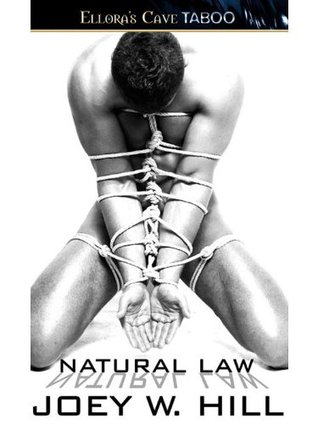 Book 2 in the Nature of Desire series.

Mackenzie "Mac" Nighthorse is a highly respected homicide detective and a career cop. There isn't a dangerous situation that can back him down.

When his path crosses Violet Siemanski's, he realizes he's found a Mistress willing to be his ally in finding the murderess. But Violet is also going to shatter Mac's shields and make him question who he is and what he wants, a challenge more disturbing than any case he's ever worked.


Reading a book for the second time for me usually means I loved it so much the first time I wanted to read it again more slowly and savor every page. Other times it is to get reacquainted with a book from a series I wish to continue. This was a combination of the two. I enjoyed this book the first time, maybe not enough to want to read it multiple times, but enough not to mind reading it again. So when I decided to go back to this series and this time read it in order, picking up Natural Law for the second time was an easy decision.

After the exotic setting of Holding the Cards with a doctor, artist, and gallery owner as main characters, this was a big change. The romance between Mac and Violet included a multiple murder investigation, few insane Doms, one asshole of a sub, and some very dangerous situations.

A while back I realized crime was really not a genre for me. It's not because I don't like reading it, but because of all the crime books I've read I could barely name a few of them with a plot I remember or who the murderer/criminal was in them. That is why I gave up on reading crime books. When I'm just going to end up forgetting them completely, I didn't see the point in reading them at all. Surprise, surprise, while I remembered the majority of what happened between Mac and Violet in the romance department, all the parts concerning the case Mac was investigating was once again new for me. I had forgotten everything, so once again the book gave me a few scares.

Besides that, there was a significant difference in the characters. Josh was so cute, and he was an artist, and every time I think of him, I wish for my own Josh. On the other hand, I do not wish for my own Mac. He can cook, but still... Like Josh, Mac is a submissive, but he is also an alpha male, possessive, and a rather difficult sub. I have utmost respect for Violet for being a Mistress that can handle Mac. Yes, Josh would be who I'd pick, but reading about Violet breaking through Mac's thick walls was great. A strong and very determined woman she is. She got Mac to finally accept her as his Mistress. The man who submitted to many Mistresses, but never truly surrendered, finally did. Not an easy feat. And luckily for me, this took up the much larger part of the book. When I started it for the first time, I thought it would be more focused on finding the murderer, but I was happy with how it turned out.

Another thing that I had completely forgotten were the side characters that appeared. I suppose the first time I had no idea some of them were important because there would be books about them later or that some were mentioned before. Serves me right for not paying more attention.

Overall, though this may not have been one of my favorites, it's still a book I loved reading both times. After all, it is a book written by an amazing writer.