Afterlife (Knights of the Board Room, #4) by Joey W. Hill 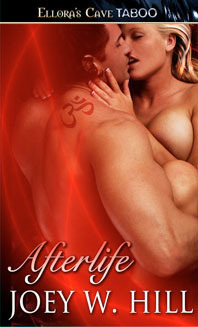 Rachel gave up seeking a Master years ago. After a failed marriage and terrible tragedy, she’s walled her soul against going down that dangerous path again. Then Jon joins her yoga class. He’s thirteen years younger than she, but his Dominant nature threatens her shields from the moment she recognizes it. Not only does he understand what her body wants—he knows what her soul craves.

Part of the five-man executive team of Kensington & Associates, Jon uses his calm, philosophical nature to defuse volatile acquisition negotiations. He can compel opponents to willingly surrender when he draws the sword that closes the deal. As a sexual Dominant, he employs that same expertise. A spiritually-driven Master who enjoys connecting with a woman’s soul, he wins her utter submission with his skills. But with Rachel, it goes beyond that. She’s the submissive his own soul has always hungered to have, and he won’t hesitate to use his talents, as well as that of the other four K&A men, to claim her.

The best book in the series so far!

To be perfectly honest, I was a bit worried before reading Afterlife. All three previous books were much shorter, and as such they were perfectly fine, so I was afraid I might get bored with this one at some point, but since this was the only book between me and Ben's story, I didn't dwell on it much, and I just went for it. As I soon realized, I needn't have worried at all. Rachel's and Jon's story was one I almost immediately fell in love.

Before I get into my enchantment with Rachel & Jon, I'd like to point out a few other things I loved about this book.

It was great to see Dana again. In Honor Bound she was mostly broken-spirited, and seeing her here in a much better physical and psychological state was amazing. I think we finally got to see her true quirky nature. Peter must have his hands full.

Another thing I loved was that we also got a more thorough insight into the relationship between K&A men, something the length of the book allowed. I can't tell you enough how much I enjoyed reading those parts. Actually, a lot of that information came from Dana, which, of course, made me like her even more.


“You want to know about the K&A men? They’re a pack, a pack that’s connected on some visceral male level that’s scary as hell to experience, while at the same time you never want that experience to end. You belong to one of them, but in a peripheral way, you belong to all of them. Like a family, only you have a lot of feelings and experiences with this family that would be highly frowned upon if you truly were blood-related.”


Yes, I loved everything Dana said about the Masters in their lives, but if you must know, the things she said about Ben were my favorite. Ever since Honor Bound I've been really eager to read his book.


“I can’t wait to see the woman who will finally catch his attention. Poor girl. You don’t see it at first, because of the slick, charming lawyer thing, but he’s probably the toughest, most hardcore Master of all of them.”


But the most important lesson was:


“I’m here to tell you, when the K&A men decide on something, a woman’s got a snowball’s chance in hell of having any say in it at all. She’s just got to hang on for the ride of her life.”


Which brings me back to Rachel, who really should have listened to this.

Rachel met Jon when he started taking her yoga class. (Of course that's where Jon would find his soul mate.) He was attracted to her from the very beginning, but the ring on her finger said she was married, so he never pursued anything with her. Still, he kept going back to her class, and did so for about a year. He was actually the one who recommended Rachel to be Dana's physical therapist.

Rachel -- I can't tell you enough how much I loved that character. Honestly, I can't. I tried. Didn't work.
Rachel's life was full of sadness. She had lost her son. Her marriage had fallen apart. On top of all that, her ex-husband had made her feel ashamed of who she was and what she needed from a man. So much sadness had been in her life that she had even wanted to end it. After all that she gave up on finding a right Master, gave up on love, gave up on sexual satisfaction, and found her purpose in her work. Her peaceful, mostly empty existence was stirred when Jon Forte joined her class. All that time he was making her fantasize about what in her mind could never happen, and when she realized he was a true Master, her yearning got worse.
At the same time, Jon got the information Rachel in fact wasn't married, so it was time for Jon to go after the woman he had wanted for quite some time.

And go after her he did. The boy genius with all those inventive toys, and skills of his own body managed to wake every single part of Rachel's body, which she thought was a thing of the past. As much as that part was rather easy for Jon, getting Rachel to embrace who she is, and embrace him certainly was not.

Personally, I loved each part of their story, and I loved them. I didn't have any problems with anything Jon did to make Rachel see that they could make it as a couple even though she was convinced a brilliant man, 13 years her junior could never find happiness with a woman like her. However, Rachel is a 24/7 sub, the power exchange was significant, and there were some very intense sessions, one even involving a few other K&A men. Jon may be a something of a zen Master, but he can be tough, very tough if need be. That's just a fair warning. I know those are not things for everyone. I, however, enjoy this genre, even ones with hardcore BDSM (so long as all participants are okay with it). Furthermore, I'm fan of this author's work, and I'm in love with this series. I'm a bit of a fangirl when it comes to Knights of the Board Room,something I'm sure it's quite obvious from my review. But no matter how much I adored this book, it does contain certain elements some readers might find objectionable.