Hostile Takeover (Knights of the Board Room, #5) by Joey W. Hill 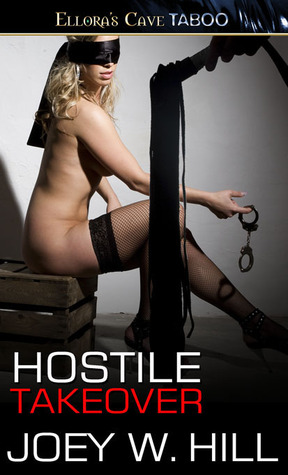 Ben is the last unattached member of the five-man executive team of K&A Associates. The other four, all Masters, have found the submissive of their dreams. That’s fine. The sharp-edged lawyer knows he’s the most hardcore of all of them, with extreme tastes as a Master he satisfies physically through experienced club submissives. He doesn’t really need anything more than that.

Marcie has loved Ben since she was sixteen. He’s never behaved as anything more than a protective big brother, a family friend. But now she’s twenty three and starting her career as a corporate investigator. She may be a blood-and-bone deep submissive, but she won’t hesitate to use her aggressive talents to prove she’s meant to be his. With a Master as tough as Ben, she’ll have to take whatever measures are needed—even if her deepest desire isn’t a hostile takeover of his heart, but an unconditional surrender to it.


Okay, this is the best book in the series. I still have one left, but I've no doubt Hostile Takeover will remain my number one.

This was the book I was looking forward to reading the most. Even in Board Resolution Ben piqued my interest, which only got bigger with each book. I've known for quite a while the name of the woman he would be paired with was Marcie, so when a girl named Marcie first made an appearance in Controlled Response, and immediately developed a crush on Ben, I had a "aha, so it's you" moment. Plus, those few glances at the reviews for this book made me realize Ben evoked strong feelings in readers. It seemed to me people ended up either falling in love with him or wanting to kill him. And me? By the time I started reading, I already had a crush on Ben of my own going on, so your guess is right: I ended up falling in love with that big sadist.

Another thing that had me wondering was how would Ben come to the conclusion Marcie was the one, and then chase after her. It seemed like a valid question. He always seemed so closed off, so I was beyond curious about how it would all happen. It turned out I was going about it the wrong way. Hostile takeovers were his favorite, but I'm inclined to think the one taken over in this case was him.

You see, the one doing the chasing in this case was actually Marcie. That was something that had never occurred to me. In all four previous books it was the hero going after the heroine, but I guess when the hero is Ben, this was the only logical way his book would go, and Marcie had to be the only woman out there willing to walk through hell to get to him. Now, that woman had balls.


If she could crack Ben O’Callahan, get him to claim her for his own, everything else would be a cinch. She could uncover secrets that would bring down governments. Or build new ones.


Yes, that sounds about right.

Just like the heroes from the previous books came into heroines' lives when they needed it most, Marcie came into Ben's. After several years of being the only single guy in the group, Ben started to feel like an intruder in that company, and in the past couple of years things only got worse. Lately the only company he sought was a bottle of whiskey, and some woman who could take his demands. Then Marcie became his intern, one that made abundantly clear the role she wanted to play in his life was the one of his slave.

Putting herself at the mercy, or lack thereof, of a Master like Ben, and one in such a bad place, made me admire Marcie from the very beginning, and that admiration only grew. Accepting everything Ben doled out on her body was one thing. He was a sadist; she knew that, was perfectly fine with it. After all she was a masochist craving everything he would put her through. She was prepared for that. She had spent years researching, collecting information, practicing, and all that was so that when she finally came to him, she would prove she was everything he needed in a submissive. However, what made me admire her most was that despite all those things, terrible things Ben said to her to make her let him go, she never wavered. That emotional strength she possessed was amazing. No matter what Ben threw at her -- and he did have some dark moments -- she managed to stand tall, accept it all, and still tell him she wanted him. Marcie is my hero.

Seven years it took for Marcie and Ben to get where they needed to be. The snippets from those years, the bits and pieces of the time they had spent together, the letters, phone calls, all that made this book even more special to me.

Another thing I liked was that here we got some more insight in how the relationship between the Masters' women worked, and that in addition to that usual scene with all the K&A men, there was one with the women.

I feel obliged to warn the book contains some hardcore S&M scenes, something that's definitely not for everyone.

For me, this was above all a wonderful love story. I was very happy to see Ben find his match, which I wanted to see for a long time, and Marcie -- after everything I read about her for finally getting what she yearned for for so many years.


“He gave his heart to her a long time ago. She brought it back to him.”


Definitely, my favorite book from the series.