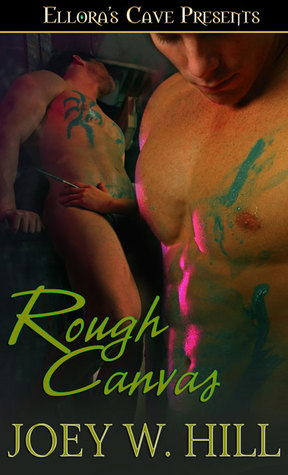 When his father dies, Thomas is forced to abandon a burgeoning art career in New York. As difficult as it was to give up his lifelong dream, it's nothing next to walking away from the man he loves. Marcus taught him to embrace who he is, a sexual submissive who responds to the touch of only one Master. But why would the sophisticated Marcus need some farm kid from the South?

Then Marcus shows up and offers him a way to continue his art career and help his family. There's only one hitch-he asks Thomas to spend a week with him in the Berkshires. Thomas knows he should refuse. But he's never been able to say no to his Master.


Rough Canvas is one of those books I wanted to read for a very long time, and one of those books I was certain I would love even before I became the author's huge fan. Yes, this is another book I really should have read sooner. Well, better late than never. In the end I wanted to read it so bad I even broke my own rule about reading books from a series in order. I just couldn't wait any longer, and I couldn't be more glad I didn't.


Thomas had heard how your life could pass before your eyes when it was threatened. Apparently every memory of that life with someone else could do the same when your heart was threatened.


Just when I think I couldn't like JWH's books more, I read Rough Canvas and fall in love with her writing all over again. I loved this book -- the beginning, the end, and everything in between. It's as simple as that. The story of Marcus and Thomas -- not so simple.

What I love most in this author's books is that she shows us these characters, tells us their history, and present in such a way I can't help but care about what happens to them. Rough Canvas brought that to a whole other level. From the very beginning, and even though I knew nothing about Marcus' and Thomas' story from the previous books, I became so emotionally involved that for the majority of the book I was very close to crying, and for the remaining part I was crying.

While in all the other JWH books I've read so far, the main characters had no prior romantic history, Marcus and Thomas did. They had good history, and an abrupt ending when Thomas left to take care of his family. The book starts over a year after that, the moment Marcus came back into Thomas' life, turning it basically upside down. I'd say it was about time he did that, but Thomas was conflicted as ever. Torn between his responsibilities and desires, Marcus and his family, his job and his art, dragged in so many directions it was giving him an ulcer at the age twenty-seven. Luckily, Marcus was too much of a temptation to pass up, so Thomas gave Marcus, himself, and his art a week of heaven before returning to purgatory.

No exaggeration, that week broke my heart. The need, the despair between them was so palpable. You could easily see how they fit perfectly together, and yet it seemed like there was no hope for them. Nor for Thomas' art, apparently. It was so connected with Marcus that without him, the inspiration was gone, too. It was a sad, messy situation. On the bright side, they were beginning to realize what they did wrong the first time around, but completely opening up to each other was still hard.

Thomas' family was, to put it lightly, not okay with him being gay. His brother was always giving him hell about it, and his mother trying to pray away the gay. They weren't supportive even with his art since all of his pieces had a m/m erotic theme. Quite honestly, this is something I hate reading about. I know it happens a lot more than I'd like to imagine, but it pisses me off so much I just want to scream, and smash some sense into the characters. Thomas, being Thomas, handled them a lot better and calmer than I would have. The man is a saint in my eyes. If my mother ever did to me what his did to him, I'd never forgive her.

Back to what I was originally going to say. Yes, they both had trust issues. Thomas believed the great and powerful gallery owner Marcus Stanton, who could have anyone and anything he wanted, didn't genuinely need him, and would eventually get bored with him. Marcus had a lot of his own demons. Getting under so many layers he built around himself was no easy feat, but it was worth it. Marcus was a wonderful messed up character. While I liked Thomas' calmness, I loved Marcus' outbursts, and yelling, because he spoke the truth everyone needed to hear. I admit, I'm a bit of a sucker for these damaged heroes. Marcus reminded me once again why I love them, and why I adore reading about them finally letting someone completely into their lives, and making themselves vulnerable to that person. Oh, yes, those parts are my favorites.

This book did put me through an emotional wringer, but I knew Joey wouldn't end a book without a HEA. There was no chance in that. The ending was almost too good, actually, but I will not complain about something that's too good.

“You. The beginning and the end, and everything in between.”