Holding the Cards (Nature of Desire, #1) by Joey W. Hill 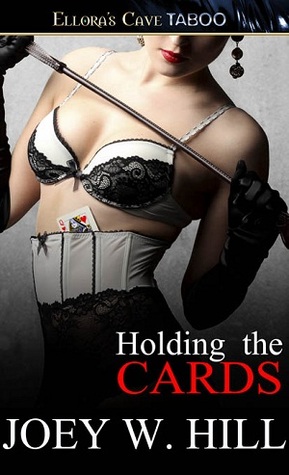 Book 1 in the Nature of Desire series.

Lauren is a successful doctor with a healthy attitude toward sex, unashamed of her proclivities as a sexual dominant. She wants love and a family, but she's beginning to believe there is no Mr. Right willing to stand by her in sickness and health...and be cuffed, stripped, and smacked with a riding crop.

Then her friend Lisette invites her to spend a long weekend on a private island. It turns out Lisette can't come with her, but Lauren opts to go anyway, with no one for company but Joshua, the island caretaker, and his visiting friend, Marcus. Though both men are beautiful, it is Joshua that catches Lauren's attention, and not just because Marcus prefers men.

Something in Josh's stormy eyes calls to her. When Marcus facilitates a game of submission and control between the three of them that will last throughout the weekend, Lauren embraces the opportunity. Josh overwhelms her with his willingness to submit to her body's desires, but her heart wants to get to the secrets behind those eyes. She is going to have to tear down his defenses and make him give her everything. And this is one Mistress who doesn't take no for an answer...


A book with Lauren, Josh, and Marcus? There wasn't even the slightest chance I wouldn't like it.

I started this series out of order by reading Rough Canvas (though, to be fair, I did that last year when I read Natural Law). Normally, even when the books are standalones, I read them in order, but I don't regret it here at all. It worked out just fine. Marcus and Thomas were amazing, and the appearance of Lauren and Josh, what little I saw of them, and what was said about their history made me want to read their book right away. Imagine my excitement when I saw their story is book one.

Being already half in love with Lauren and Josh when I started Holding the Cards wasn't the only effect of Rough Canvas. The other one was that I appreciated those details about Marcus and Thomas more, especially that beautiful scene when Marcus collared Thomas the first time. Yes, yes, I still have have a huge crush on that duo, but back to the main lovely couple: Lauren and Josh.

As much as I enjoyed the corporate setting and the businessmen of the Knights of the Board Room series, I think I enjoyed the island and its artist residents even more. It felt more relaxed. It was a place I wouldn't mind living in.

Lauren came to the island to battle her own demons, repair the damage her ex left behind on her life, and her being. Finding Josh and Marcus on the island was the best thing that happened to her. To Josh, too, and it did good to Marcus as well.

By now it's as clear as day I have a special fondness for male subs. Josh was a wonderful reminder why that is so. Submissive and an artist?! I never stood a chance. To describe how much I liked his character, I wouldn't even know where to begin. Like Lauren, Josh was also hurt by his ex, even more than Lauren. The demons that haunted him were much harder to defeat, but Lauren was there determined to do it, and so was Marcus.

The whole story took place in only a few days, but I never felt like they were moving too fast, though everything said they were. The credit goes to the author, as always. She makes it all seem right, exactly the way it's supposed to be, with characters that seem so real you can't help but care for them, feel their pain, and root for them to get better. That's how I felt for Lauren and Josh. I wanted so much for Lauren to get her confidence back, and Josh to realize he wasn't a bad man. And, as always, through these characters the author showed the aspects of D/s relationships that I don't find anywhere else, which is another reason I love her work as much as I do.

Returning to this series was indeed a wise decision.