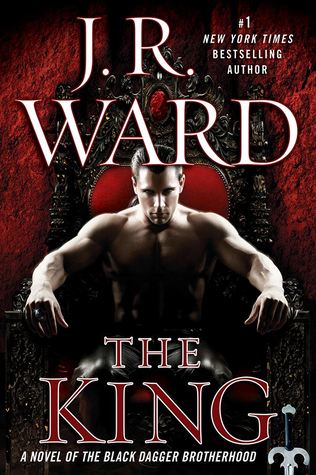 J.R. Ward's # 1 New York Times bestselling Black Dagger Brotherhood continues as a royal bloodline is compromised by a grave threat to the throne.

After turning his back on the throne for centuries, Wrath, son of Wrath, finally assumed his father’s mantle—with the help of his beloved mate. But the crown sets heavily on his head. As the war with the Lessening Society rages on, and the threat from the Band of Bastards truly hits home, he is forced to make choices that put everything—and everyone—at risk.

Beth Randall thought she knew what she was getting into when she mated the last pure blooded vampire on the planet: An easy ride was not it. But when she decides she wants a child, she’s unprepared for Wrath’s response—or the distance it creates between them.

The question is, will true love win out... or tortured legacy take over?

BDB series is or better say was one of my favorite paranormal romance series for many years with Wrath's, Zsadist's and John M.'s books being my fav books of the series and Blay and Qhuinn being my ultimate favorite BDB couple. Then, why did it take me more than a year to read this book? Well, mostly because I wasn't overly excited with author's plans to focus again on the old couples instead of the new ones, so I decided to wait until I was in the right mood for it again. Now that I've finally read it I don't regret it at all, because...

Lets start with the things that I actually liked about this book:

- Multiple povs
Multple povs in books were usually hit/miss in my reading history, but when it comes to this one it was definitely a miss. I can deal with it when the povs are focused on one story, but this book felt as if it could have been divided into at least 2-3 separate books.

We have Wrath's & Beth's storyline, then Trez's and Selena's, Xcor's and Layla's, Assail's and Marisol's, some characters individually and all that in one book. We even get povs from totally irrelevant, side characters. I mean, I said it already for the previous book, but Ward has truly taken the multiple pov exchange on a whole new level, and not in a good way in my opinion. To sum it up- the plot was all over the place.

The first 100 pages bored me so much that I put the book on hold for more than a month and then got back to it hoping that the story will get better, but that didn't happen. I wasn't impressed with the way the author developed the story, solved the supposed twists or with the immature and foolish behavior of the majority of the characters. The author's writing failed to make me care about the characters or their storyline for the most of the part and don't let me start on the cheesy content...The one question going through my head while reading was: Why was I a fan of this series, again???

- The boring and repetitive sex scenes
To be honest, I was skimming a lot when it comes to those parts.

All in  all, when I compare this book to the newest installments of my other favorite urban fantasy/ paranormal series, I truly don't think it deserves more than 2 stars. Sadly, I think the time has come for me and this series to part ways, because I'm not happy with the direction the author is taking the plot. I won't say it's for good, but with the way things are now- I'm too disappointed to even see myself getting the next book.

Purple
Posted by Anonymous at 12:25 AM