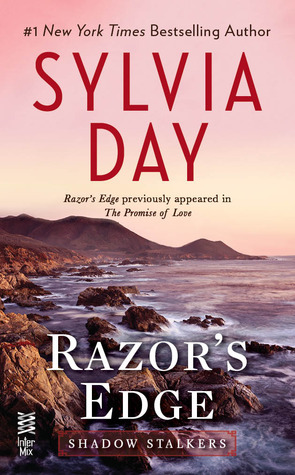 
From Sylvia Day, the #1 New York Times bestselling author of the Crossfire novels, comes Razor’s Edge, a novella of the Shadow Stalkers—where hearts are laid bare, where desire is a risk, and where love is born from the most intimate secrets…

It was a cool night in Carmel but for Deputy US Marshal Jack Killigrew, thoughts of Rachel were generating a lot of heat and sweat. But having her could never be more than a fantasy. She was his best friend’s widow. He promised to look after her should anything happen. And there’s no way Jack could betray the memory of his buddy by making moves on the guy’s wife—no matter how long he’s desired her.

Rachel’s marriage had been perfect. So had her husband. But fate had a different plan. Now Rachel’s a single mother, resilient and independent. It’s time for her to move on and let a new man into her life. Jack’s been there for her in the past but now she needs him in a different way. All Rachel has to do in convince him that it’s right, that it’s the best thing for both of them, and that it’s about time…

A few years back when I was rediscovering the magic of reading interesting, entertaining books, and before I found the many authors I now love reading the most, I admit to have fallen under the Gideon Cross spell. At the time only two Crossfire novels were out, and remember a lot of my favorite authors were still unknown to me, so I decided to read other books by Sylvia Day. I went through the majority of them, I believe, but of the Shadow Stalkers I only read the longest one On Fire. All the others were much shorter, and they were all available only as parts of anthologies, so I skipped those. Now that they are available separately, and with me feeling nostalgic, I figured it was time to back to these stories and their jummy stalkers.


Jack Killigrew is a SOG deputy marshal--a Shadow Stalker--who regularly fights criminals, but not in Razor's Edge. No, here he was fighting his feelings. It's a short story--focus has to be on the priorities, and in this case it was the matters of the heart. For years he'd been in love with his best friend's wife, and for years he'd been able to keep those feelings under control, but that had become more difficult in the past couple years. Ever since his best friend died, that is. Even though Steve asked him to look after his family if anything happened to him, Jack felt it would be wrong going after her on many levels. Little did he know in the period he'd been avoiding her, Rachel had become a completely different woman who was determined to have him.

The woman she was today was more than capable of tackling a challenge like Jack Killigrew. And by God, she intended to.

Poor man never stood a chance. The intense emotional and physical relationship, that I've come to expect for Sylvia Day's novels a long, long time ago, was present here, too, just on fewer pages, but it was still good. There may have been a few things said I wasn't exactly a fan of, but the hotness cannot be denied, and I wouldn't dream of it. The men these heroines meet always make me want to say: I'll have what she's having, and this was no exception.

All in all, a very enjoyable short read.