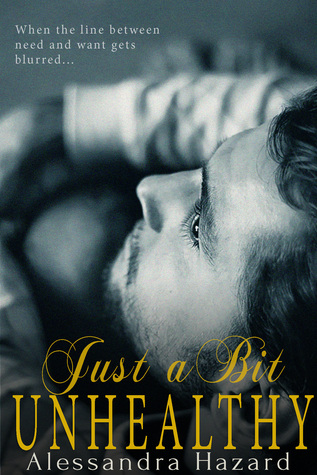 Connect With The Author:
Goodreads / Blog

When the line between “need” and “want” gets blurred...

To the outside world, they’re just good friends. But the truth is, Gabriel isn’t entirely sure what they are to each other.

Some call their relationship unhealthy. Some call it codependency. Gabriel calls it confusing. He knows Jared wants him – as more than a friend. He doesn’t want Jared. He’s straight, he has a girlfriend, and he loves her. But Jared is… Jared is more. Jared is his. He needs him – his touch and his strength.

But is it enough for Jared?

Publisher's warning: This is not a light-hearted story; this is a rather twisted gay-for-you story. It contains some steamy MM scenes, explicit language, and two people so wrapped up in each other that the nature of their relationship goes beyond friendship--and beyond normal.

I loved the first two books of this series, so there was no question whether I was going to read this one, even though Gabriel & Jared didn't exactly win my affection so easily as the other characters after we first met them in the previous book.

Unfortunately, my first impression of them didn't change even after I've read their story. Frankly, they ended up being my least favorite couple of this series. Why is that? Well, the main reason for that is one of the main characters- Gabriel. His immature, childish, manipulative and needy, but above all selfish behavior got on my nerves since the first page, together with a few un-fu*king-believable choices of other characters (Jared, Claire etc.) He was a true drama queen in my opinion making everything and everyone about himself. I didn't appreciate how he behaved towards Gabriel or his girlfriend Claire. Whereas I was glad for the way things turned out for the girl in the previous book, because she totally had it coming, I didn't like like the way things were handled for Claire in this one, even though she wasn't exactly innocent herself. I actually felt sorry for her.

In comparison to Gabriel, I liked Jared for the most part. He seemed sweet and sincere, but too kind for his own good. What I didn't like is how easily he gave into Gabriel's every wish, even after everything he had put him through. I prefer characters with more attitude and self-respect than that. To sum it up- the author failed to make me connect with the characters or care about them. In the end, I became totally indifferent whether they'll have a HEA or not.

Don't get me wrong, there were some very good moments too, but sadly, they ended up overshadowed by the melodrama for me and if there's one thing I don't appreciate in the books I read that's melodrama. That is why 2.5 stars. This won't prevent me from reading the next book though. What can I say- I'm too weak when it comes to these friends-to-lovers/ gay-for-you mm romance books. Hopefully, my impression of the next installment will be more positive than this one.

Purple
Posted by PurpleBook at 12:15 AM