Review: THE VIRGIN (The Original Sinners, #7) by Tiffany Reisz 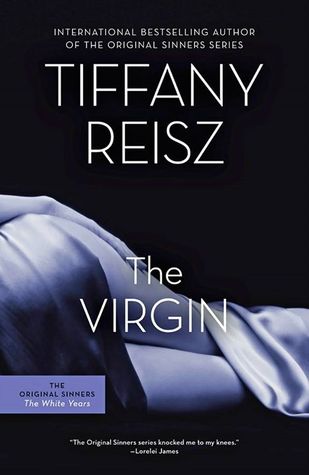 
For years, Kingsley Edge warned Eleanor the day would come when she, the mistress of a well-respected Catholic priest, would have to run. She always imagined if that day came, she'd be running with Søren. Instead, she's running from him.

Fearing Søren and Kingsley will use their power and influence to bring her back, Eleanor takes refuge at the one place the men in her life cannot follow. Behind the cloistered gates of the convent where her mother has taken orders, Eleanor hides from the man she loves and hates in equal measure.

With Eleanor gone, the lights have gone out in Kingsley's kingdom. When he learns the reason she left, he, too, turns his back on Søren and runs. On a beach in Haiti, Kingsley meets Juliette, the one woman who could save him from his sorrows. But only if he can save her first.

Eleanor can hide from Søren but she can't hide from her true nature. A virginal novice at the abbey sends Eleanor down a path of sexual awakening, but to follow this path means leaving her lover behind, a sacrifice Eleanor refuses to make.

The lure of the forbidden, the temptation to sin and the price of passion have never been higher, and Eleanor and Kingsley will have to pay it if they ever want to go home again.

Once upon a time Grey's Anatomy was one of my favorite TV-series. I could have watched it and McDreamy all the time. Now it's one of those TV-series I still watch because it would feel wrong not to know what's happening with what's left of the original cast, but all the while wishing the current season is the last season.
Grey's Anatomy is not the only one I've felt this way about. That is why even with the book series I approach the newest book with excitement, but also a bit of trepidation. There is always a possibility that book may be the one that would make me wish the series was over. With The Original Sinners books I always end up wanting more. Seven books into the series, and I'm still excited about learning new things about these characters, even the characters who aren't Kingsley! And, boy, do they have stories to tell. I will miss them so much when it's all over, so book eight, The Queen, makes me both happy and sad. In 199 days I get more of Original Sinners. In 199 days it all ends. 199 days... but who's counting?


Back to the book at hand. The Virgin, like the its two predecessors, takes place both in the past (which takes up majority of the book), and the present. Now more than even I'm glad Ms. Reisz decided to give us glimpses into the characters' lives after The Mistress even though it wasn't part of the original plan. Besides satisfying my endless curiosity about what these characters are up to, and seeing Nora finally getting her HEA, I love it also because it's good to see them so happy, and content, in a more relaxed situation, joking instead of fighting. I've enjoyed The Red Years immensely, but there was always something bad happening to them then; this is a nice change. I've never been a fan of that "amor omnia vincit" saying--frankly, I thought it was full of crap--but they appear to proving it right.
The 2014 Christmas story, Christmas in Suite 37A, was a great intro to the present parts of The Virgin, so I think it would be best to read that before this book. Though, I can't imagine anyone who's a fan hasn't already read it... It's Griffin & Michael, after all.


Those few chapters set in present time served another purpose: it created the perfect atmosphere for Nora, Kingsley, and Søren to reminisce about a very difficult year in their lives, the year that changed everything...


Those of us who have been reading this series know what led to Nora leaving Søren, but if you thought you had all the major facts about that, think again. Tiffany Reisz is one helluva storyteller. Even when she's writing a story about something we, the readers, are already familiar with, she makes it fresh, with tons of new interesting information. So what led to this breakup and how it happened managed to surprise me. Just when I thought nothing could surprise me from them. Silly me.


And so it happened: Elle left. Then Kingsley left. Søren was left behind.


There's a small part of me that feels bad for Søren for everything he must have gone through that year, but most of me says: Good! But this book is not really about him. No Søren's POV ever! And since he drove people who love him the most away, there was only a little of him in the book.


The Virgin had two narrators, and two story lines (here I'm referring to the parts set in the past): one was Elle/Eleanor/Nora (many names she's got, but here she was Elle), and the other is our very own king: Kingsley. As much as I would like to start with Elle given hers is the first POV in the book, I just can't wait one sentence longer to write about how once again I've gotten to like Kingsley more, even though I thought that was impossible.


The story of how Kingsley met Juliette was one I've wanted to read for a very long time. She was important to him--that was always crystal clear, but with all the drama happening between him and the other main characters, Juliette sort of remained in the background. This time around the spotlight was on her and Kingsley, and I very much liked what I saw. I adored these sides of Kingsley we didn't get a chance to properly see in the earlier books. Kingsley in The King was worth waiting for, and so was this one. As per usual getting Juliette was far from easy. If I hadn't known they were together in the present, there was a lot of potential for me to feel heartbroken. There was a lot of heartache, that's for sure. There always is with Kingsley. I'd rather not retell everything that happened that year in Haiti. Suffice it to say it was hot (and not just because of the sun), sweet, and also sad, but with a very satisfying chained-to-bed ending.


It wasn't just the love for Juliette that made me fall even harder for that Frenchman. To the long list I'm also adding loyalty to Elle he showed even when his loyalty to Søren could/would have trumped that, and how protective he was over his young secretary, even how he treated his dogs. That man... *sigh*


While Kingsley was traveling the world/avoiding New York, Elle was in her mother's convent avoiding the outside world, but mostly Søren. It was there in that convent that I think I saw the woman who'd become Nora Sutherlin, the famous erotica writer & the most famous Dominatrix, and it was a young new nun that helped her get there, no less. Kyrie brought out Elle's Dominant side, though someone else started it before. I've wanted to learn their story ever since Nora mentioned she was involved with a nun in The Mistress Files. It was a sweet story that, unfortunately, had to end, but played a major part in where Elle's life would go next. Well, Kyrie, and Kingsley. And while there are many fans of Eleanor & Søren duo out there, I could never imagine her only being Søren's submissive, so I'm glad we got to the point where she started exploring her Dominant self. That it used to piss off Søren is just a bonus.


The next chapter in the OS saga (coming in 199 days!) promises to be an amazing one. I CAN NOT wait, although I'll probably end up crying because it's over. Oh, well. C'est la vie...