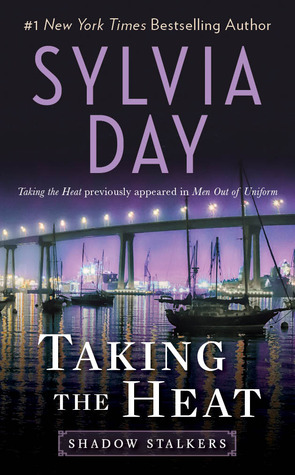 
From Sylvia Day, the #1 New York Times bestselling author of the Crossfire novels, comes Taking the Heat, a novella of the Shadow Stalkers—where men in uniform are trained to enforce the rules. Out of uniform, those rules are made to be broken.

He had three days to fix everything. Three days to remind her of how good they were together. She was a captive audience…

Layla Creed and Deputy US Marshal Brian Simmons have a history that is as hot and heartbreaking as it is unforgettable. Now their paths have crossed once again. This time things are twice as hot. Layla—a protected witness—has been persuaded to come out of hiding and testify in a sensational murder trial. But as far as Brian’s concerned, there’s an even more pressing problem.

Once Layla testifies she’ll get sucked back into the Witness Protection Program. A new identity, a new location, a new occupation—and a new inspector to check up on her. In other words, out of his life forever. There is one more option—take Layla and go on the run. Rekindling what they once had should be easy. But a stranger in their shadow has plans of his own, forcing Brian and Layla to risk everything in the name of love.

New Shadows Stalkers story, new couple, explosion, taking the heat, running from authority and a cartel, getting busy in the sheets, arguing... And only three days to fix everything.

Brian & Layla aren't 100% new: there was a tiny part in Razor's Edge with them, though Layla was only mentioned as the cause of Brian's heartache. Five years worth of heartache.

After all the romance stories that have made it to my Read shelf, I can safely say I really love the second-chance romances. Maybe it's the added drama, or that I'd like to believe if people screw a good thing once, that it isn't beyond repair, or perhaps to believe people get wiser in time, and don't keep making stupid mistakes. Whichever it is. What's important is that I like it.

Layla and Brian had had five years to regret their separation, which is five years too long, but humans have a tendency to say stupid things instead of being open when it's most needed, and fictional people aren't exempt. But after five years of loneliness and heartache Brian and Layla crossed paths again, and pretty quickly reignited their passion. And that time around Brian was far from willing to let Layla walk out of his life. Once was more than enough.

While Razor's Edge didn't have a story line concerning the hero's job as a Shadow Stalker, Taking the Heat did. That was what actually brought them back in each other's lives: Brian was sent to protect Layla who had been in the Witness Protection Program the past two years, and supposed to testify in a trial in only few days time, something the accused one's weren't willing to let happen. While Brian trying to get Layla safely to her destination is a big part of the plot, the major focus is really on the romance: Brian & Layla step by hot, dirty, sweaty step getting to their happy ending. Personally, I prefer it this way. If only he hadn't kept calling her baby, I would have liked it even more. When you're in need of something steamy, and on the shorter side, this could do the trick. Or if you're like me recovering from The Fault in Our Stars.