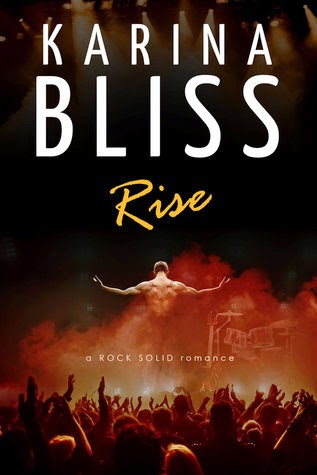 Rise - The redemption story of a rock star going straight(er) through the love of a good(ish) woman.

Acclaimed literary biographer Elizabeth Winston writes about long-dead heroes.
So bad-boy rock icon Zander Freedman couldn’t possibly tempt her to write his memoir.
Except the man is a mass of fascinating contradictions–manipulative, honest, gifted, charismatic and morally ambiguous.
In short, everything she seeks in a biography subject.
When in her life will she get another chance to work with a living legend? But saying yes to one temptation soon leads to another.
Suddenly she’s having heated fantasies about her subject, fantasies this blue-eyed devil is only too willing to stoke.
She thought self-control was in her DNA; after all, she grew up a minister’s daughter.
She thought wrong.

Rock star Zander Freedman has been an outlier–many would say an outcast–for most of his life.
But there’s no disaster he can’t overcome, from the breakup of his band to the inevitable damage to his reputation.
His Resurrection Tour is shaping up to be his greatest triumph–if his golden voice holds out.
Contracting a respected biographer is simply about creating more buzz. Elizabeth’s integrity is the key to consolidating his legacy as one of rock’s greats.
All the damn woman has to do is write down what he tells her. Not force him to think.
Or encourage the good guy struggling to get out.
And certainly not make him fall in love for the first time in his life.
Turns out he is scared of something: being known.

Well, well.. this was such a pleasant surprise! This is what I call good writing, people!

First, I want to thank my friend Iva for recommending me the book. She said that the banter between the MCs reminded her of our favorite Connor and Rose from Kiss the Sky, so of course I wanted to check it out. Besides, who doesn’t love a good flirt-fight? ;)

Now, where to begin? Maybe from the thing that I noticed first and the thing that completely seized my attention from the start and that is – great writing. Romance novels are full of tropes and clichés and it’s becoming increasingly difficult to stumble upon those really good ones. To me, Rise truly stands out: it has flawed characters, witty dialogues, interesting plot, AND intelligent bantering and sexual tension between the two main characters – Elizabeth and Zander, is off the charts.

Moreover, what I particularly liked about Rise is the fact it’s not your typical rock-star romance. Other characters are well-developed and thumbs up for additional female characters who have their own sub-plots! Go Dimity, Stormy & Kayla!

Zander vanished into the dark. Seconds later a vocal note, as menacing as dragon-smoke, rose and curled like a helix around the instrumentals. A spotlight flared and he appeared, arms raised, stance wide, his face seared white. And still that note soared…

Scenes where Zander was described performing brought images of Jared Leto singing Hurricane to my mind. Ah, a girl can dream.

Furthermore, I’m so happy I discovered this author. I’ve never heard of Karina Bliss before, but after Rise I’ll be definitely checking out her other books!

Overall, if you want to read a sexy and intelligent romance, devoid of adolescent angst, I’d highly recommend this book!

PS: I’m also so happy that there will be more books in the series dealing with other characters. I can’t wait for Dimity’s story. She’s badass!
PPS: That memoir In Bed with a Rock God, I’d sooo read it.