The Saint (The Original Sinners: White Years, #1) by Tiffany Reisz 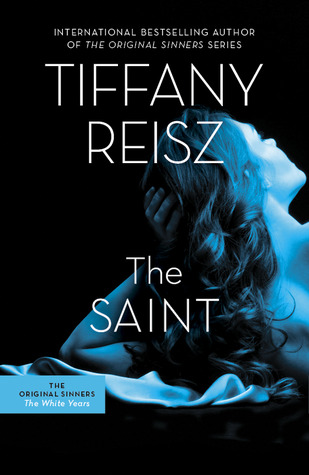 This book has been laying on my shelf for months now, but I kept avoiding it despite this series being one of my favorite ones. The main reasons for that are my disappointment with the  development of the plot in the previous book and above all the fact that this installment is about Nora's & Soren's past and them two are currently my least favorite characters.

It's not that I don't like them, it's just that I'm ready for the story to move on from the "ode and glory" of Soren & Nora on someone else, like f.e. my ultimate favorite character Kingsley. And there we have the reason why I stopped avoiding this book- Kingsley's book The King is next and I missed my Frenchman so much, so I decided that it's high time to suck it up and read the book to finally be able to read The King. And then of course the one thing happened which almost always happens when I'm being certain I'm gonna dislike some book even before reading it- I actually ended up liking it a lot, what only confirms the fact how amazing this author truly is.

"Welcome to polyamory." Kingsley sat his drink down.
"Polyamory?"
"Poly means multi. Amory means love. It's common in our world, having more than one lover. I don't mean lover in the sexual sense alone. I mean loving two people."
"Sounds like nightmare."
"Wasn't it Oscar Wilde who said there were two great tragedies in life- getting what you want and not getting what you want? Polyamory is the tragedy of getting everything you want all at the same time."

I'm really glad now that I've read this book, because after finishing it a lot of things became clearer. Things like character's personality and plot development I had difficulties processing before. I think that if this had been the first book in the series instead of The Siren I would have understood those things a lot easier, but that was probably the author's plan- to mess with our heads and make us question everything. What I'm finally aware of now is that to love this series you have to be okay with the term from the quote above- polyamory.

Why? It's because that's the lifestyle of the main characters of the story and if you have problems with it, then it's better not to read this series at all. If I had known that before I would have probably never read this series, because despite my weakness for dark, thought-provoking and bittersweet reads, deep down I'm still a romantic and my idea of love is completely different than "polyamory" and while it does make for an intriguing, even fascinating story, the fact that these characters have multiple partners and call it love, is still strange/uncomfortable to me and it'll probably always be.

I was okay with it in the beginning, mainly because I thought that they'll eventually settle for someone in the end, but considering the direction the plot is going, it seems that the number is only increasing. That's why I surprisingly enjoyed more the plot focused on the past events than the present. I know that many of you who know me also wonder if in that case this book finally managed to change my opinion about our sadist priest Soren (for those who don't know- I'm not his biggest fan from book 1)? - Well, kind of. I'm still not his biggest fan and I don't think that will ever change, but I definitely understand him more now. And yes, I still think he & Kingsley are meant for each other.

So the story's only flaw for me was the development of the plot in the present. I liked the younger version of Nora more and I wasn't fascinated with the addition of the new character- Nico, despite him being the son of you know whom. He seemed quite monotonous in comparison to the rest of them. I was frankly a bit bored when reading their present with exception of that one scene including a stick, lol. The writing was flawless like always. It was Tiffany's sadist pen at her best, but as far as the story is concerned- I liked it a lot, but I didn't love it. That's why 4 dark, poignant and way too hot stars. Kingsley, here I come!

Purple
Posted by Anonymous at 1:35 PM