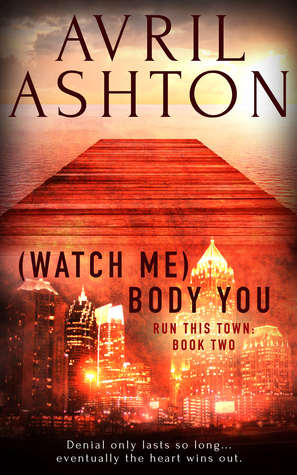 Denial only lasts so long…eventually the heart wins out.

What if loving him…

After recent events that had his life flashing before his eyes, Israel Storm is re-evaluating everything. His friends. His priorities. What’s not going to change is the deep connection he’s developed with Reggie Turner. They’re comfortable with each other, partners in crime with no qualms about sharing women. Whatever Is needs, Reggie is the one he calls. Their bond can survive anything. But maybe not the kiss Reggie plants on him out of nowhere.

Despite what Is thinks, that kiss came from somewhere. An un-named current has been flowing between them for months. Reggie doesn’t bat for his own team, but the more time he spends with Is, seeing past the rough façade of the man leading The Rude Boys, the more Reggie loses sight of labels and where he fits. All he knows is there’s something there, something Is will never acknowledge. One kiss leads to a punch that lands Reggie in the ER, and sends Is digging through his darkest memories in search of himself.

Friendship is all that’s left if they bury the truth. If they ignore the pull that makes it impossible to do anything other than fight each other. But denials can be exhausting and hiding isn’t working, not when everyone can clearly see your heart’s desire. An enemy is out to make an example of Is, and his weapon of choice will leave this Rude Boy bloodied…and bodied.

I don't know if it's because of my weakness for friends-to-lovers/gay-for-you mm romances, but I enjoyed this 2nd installment in the Run This Town series by A. Ashton much more than the first one. The leading couple of this book are Israel Storm a.k.a Is, X' best friend and the leader of the gang called the Rude Boys, and Reggie Turner, Is' best friend and one of the gang members. The story continues right after the ending of the first one, with Reggie taking Israel into hiding to his old childhood cabin near the lake where the recent tension between them starts to escalate.

"Maybe he knew. Maybe Is knew. Reggie couldn't take the chance so he took what he was given like a good little soldier would,
he took the scraps of emotion he caught every once in a while in Is' eyes,
he took the fleeting touches that weren't quite fleeting and the promise of maybe, possibly, that came with each puff of breath Is expelled.
He took it all and tried to tell himself it would be enough."

Is and Reggie have only met recently, but they bonded right away. It was sort of a bromance at first sight and soon enough they became inseparable. Neither of them ever thought that their growing friendship could turn into something more. Right in the first book of the series - (Watch Me) Break You (RTT, #1) we witnessed the beginning of a change between two of them followed by palpable tension and Reggie admitting his feelings for Is to X. Both of them were straight their whole life and now they find themselves confused and terrified to lose one of the good, light things in their dark, criminal life- their friendship, especially when they end up stuck in Reggie's cabin with no place to run from their new-found feelings. Add to that growing family problems and possible gang war and you have a perfect recipe for disaster.

The main focus of this installment is on the slow-building romance between Is and Reggie and I wouldn't have wanted it any other way, because they totally won me over right in the 1st book. You have two gangsters who have gone through heaven and hell and found each other on that path and unexpectedly fell in love for the first time in their life, but in the dark world of gangsters, where you have a constant target on your head and where homosexuality isn't exactly welcomed, the price for that love might be too high. Is and Reggie were just like X and Dima- strong, bad-ass characters, but there's also a softer, endearing side to them, visible only to their inner circle and that's one of the things I like the best about this series. It took time for them to finally let go of their fears and doubts and take that next step, but the waiting was so worth it. Two words: hotness overload!

"I want what people who feel like we feel,
who burn like we fucking burn, have. Because I burn, Is.
I want what we should have. Nothing less.
We've changed too much to ever go back."

Fans of X & Dima will also be pleased to hear that both of them make appearance in this installment too and guess what- they have some big news for you, but I'm saying nothing. Read the book and find out. I must admit that my feelings about this series were kind of conflicted after reading the first book, but now I'm totally hooked. Bring on the third one!

Highly recommended to every fan of dark contemporary/friends-to-lovers/gfy romances!

Purple
Posted by Anonymous at 8:00 AM