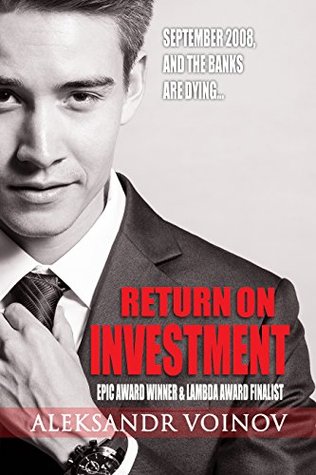 
Martin David, an eager but inexperienced financial analyst, is the newest member of the investment team at Skeiron Capital Partners in London. His boss is an avowed financial genius, but he’s also overbearing and intense. Despite his erratic behaviour, Martin can’t help being drawn to him both professionally and personally.

Too bad his boss doesn’t seem to feel the same. In a firm where pedigree and connections mean far more than Martin’s newly-minted business degree, Martin feels desperately inadequate—at least until he meets the enigmatic investment manager Alec Berger, who promises to help Martin establish himself in the financial community. Martin is so charmed by Alec’s sophistication and wit that he gives him data that should have stayed confidential.

Then the financial crisis hits. Banks burn, companies teeter on the brink, and Skeiron’s survival is at stake. Martin is pushed into the middle of the fight for Skeiron—against both the tanking economy and a ruthless enemy who’s stepped out of the shadows to collect the spoils.


Let's start with the cover. While the model on it certainly would attract my attention, I think the title Return on Investment, and the tagline: September 2008, and the banks are dying... would probably have made me decide that this really wasn't the type of book for me. Honestly, if you had asked me even what return on investment was, I'd have just stared at you blankly. However, as far as I'm concerned the best recommendation a book can possibly have is that it's written by Aleksandr Voinov. I have come to the point where I don't care what the book is about, which genre it is, what the title or the cover is--if he wrote it, I'm there! Even if the book is about the financial meltdown of 2008.

My favorite show of all times is Seinfeld, and I swear there is a valid reason I'm mentioning this here (other than I really love talking about Seinfeld). That show about nothing, in my humble opinion, with each new season only got better. I have the same feelings for this book: with each chapter the story got better, and the more I read the more I wanted to read it, so I ended up terribly disappointed when I reached the end. That last part was my favourite one, and I wanted it to last much longer than it did. I may or may not have had a little meltdown of my own right there.

However, before I got all sucked in Martin's life, I admit, I had some trouble getting into the story. I actually put this book on-hold for a little while. I guess all those warnings about the content hadn't sunk in yet, even if I had thought otherwise. And Martin, the main character, was behaving rather recklessly, which made me worried about him, and how his life would be at the end, so a break was what I needed. And it did me good. When I resumed reading, it was with adjusted expectations, and as I said, the story only got better.

The story got better while the economy got worse. Admittedly, I know very little about the financial world, and I honestly don't want to know; it's something I have zero interest in. But trust Aleksandr Voinov to get me at least a little intrigued to see how it works. I didn't understand everything, and trying to understand it did slow my reading at times, but it worked out fine. What I liked about this aspect of the book is seeing how the turmoil affected a specific company and its employees. The news covered that storm, but seeing it through the eyes of a character who was in the middle of it made it all more real.

Now for my favourite part: the characters, and their interactions. If there's one thing I can count on finding in this author's books, it's characters that will become very dear to me, so much so that I'll wish they were real so we could become friends. Needless to say, I found them in Return on Investment, too. Martin took a little while to win me over though, but once he did, that was it--I only grew to like him more and more with each read page. I was thrilled that everything that happened to him and around him served to make him better, smarter, wiser. Seeing him become that man he was at the end of the book was an incredible journey. The world could use a man like Martin David.

Francis, too, slowly grew on me. The man was an enigma, and as Francis, the man, revealed himself, the more his character appealed to me. I'm not gonna lie, like Martin, I developed a crush on him. Therefore, any new book with him in it is most welcome.

The romantic relationship between Martin and Francis had an odd development, but given the circumstances I do think it went well. I was happy with how they were in the end. Also, the author's note at the end about where these characters were heading was much appreciated.

Another character that left a good impression is Josh. There wasn't much of him in the book, but he was a friend who would step up when needed, and I liked what his presence did for Martin.

Even Syed I ended up liking. Who knew?

But in the midst of all those loveable characters, there was him: Alec Berger, the devil in disguise. Just thinking about him makes my skin crawl. It was Martin's involvement with Alec Berger that made me that break in reading; his character hadn't sit well with me, and even though Martin hadn't realized it at the time, his behaviour had been that of an evil, despicable predator. I hope he gets what he deserves. But he did show how some office/company politics work, so that's something, I guess.

And, hey, I finally know what return on investment is. :)

My thoughts in the end are same as always after finishing an Aleksandr Voinov book: I want more!