ARC REVIEW: Beneath the Surface (Reluctance, #1) by M. A. Stacie 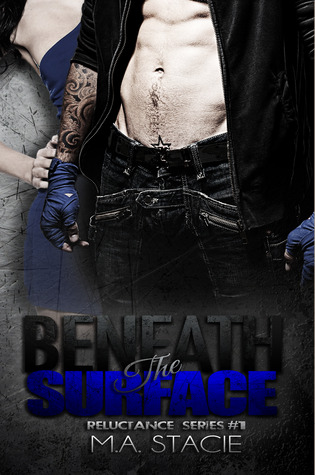 Kyran Reese is a man in control. Driven when it comes to work, focused when it comes to play. From his office to the chalk circle of the bare-knuckle boxing ring, his only thought is to win. That thirst heightens when Dale Porter enters his life. His brother’s assistant should be off limits, but her witty comments and sarcastic comebacks have him desperate to get her between the sheets.

When Dale agrees to Kyran’s relationship stipulation of no labels she’s sucked into a whirlwind of lust, money, and underground boxing. Dale fights her growing affection, trying to hide it when the world around them spirals out of control. All too soon she realizes she can’t hide her true feelings any longer.

Has Kyran finally met his match? Could playing to win mean playing for keeps?

I was excited about reading this book and I won't pretend that the main reason for that wasn't the mention of a male hero being a boxer, because it was, but unfortunately, overall in the end the story fell flat.

The reasons for my rating:

“I have fucked you. Numerous times, in fact. We will continue to do so because, seriously, Dale, it’s amazing....Now, get on the floor. I need to feel you wrapped around my dick. Now.”

Drama, sex, drama, sex, drama, sex, drama and so on and on... That about sums it up. The story failed to grab me from the very beginning and it barely improved through the rest of it. The beginning was shaky. The story starts with the awkward and quite unbelievable job interview when the MCs meet for the 1st time which turns into insta-lust and soon enough into "push & pull", no strings attached relationship rich on sex and unnecessary drama. Aside some emotional moments involving family problems, the story and both the characters lacked depth in my opinion.

"What are we doing Kyran?"

Both of the MCs weren't the type of characters I prefer reading about. I found them annoying, shallow and reckless through the most of the book. They are supposedly in their middle twenties, but they acted more like teenagers. Kyran- being the typical dark, misunderstood and manipulative alpha male sending mixed signals til' the very end of the story and Dale chasing after him like a lovesick puppy and constantly questioning: "What are we???"  If I were her I would have given up on him long time ago.

~ Who should read this book:

- readers who want a light read with a lot of sex  and "push & pull" drama
- fans who like their male heroes dominant, cocky, pushy, controlling and ready to bolt whenever there's mention of any real commitment and heroines who will put up with it all, because- hey, he's so good in the sack!

I don't like writing bad reviews, but I have to stay true to myself and this is how I felt. We all have our reading preferences, so read it and decide for yourself!

Posted by PurpleBook at 6:06 PM