ARC REVIEW: Crescendo (Songs Of the Fallen, #2) by Rachel Haimowitz 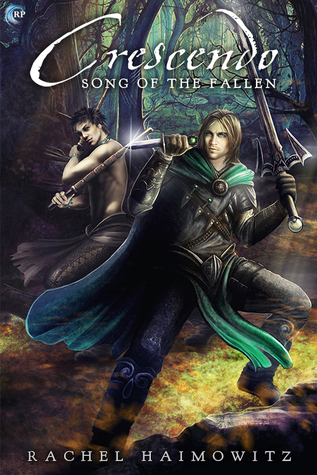 Bridging the hatred of centuries did not come easy for Freyrík Farr and Ayden Vaska. As prince of a war-torn human province, Freyrík could ill afford to fall for an enemy. And Ayden, an elven warrior with three hundred years of bitterness in his heart, wanted no part of love. Yet they came together despite themselves and the wills of their peoples, joining hearts and minds to fight a race of Dark Beasts threatening the extinction of mankind.

Yet the Dark Beast threat pales beside the dangers of a summons to the human High Court, home of the Aegis Exalted and the harshest test yet of Ayden’s and Freyrík’s fledgling love.

When the Aegis strips Ayden of his magic, Freyrík is forced to choose between his love for elf, Aegis, and king, all the while seeking the one uncertain path that might save his doomed race. Time is fast running out for mankind, and only by making peace amongst themselves and with their ancient elven enemies can they end the Dark war—and undo the tragedy that’s plagued humans, elves, and Dark Beasts alike for the last three hundred years.

(This title is a lightly revised second edition of Crescendo, previously released with a different press.)

"...and suddenly it didn't matter that their songs couldn't twine when their bodies and hearts and minds fit so perfectly, harmonized so exquisitely well. He hung in the moment, a perfect crescendo, and wanted for absolutely nothing."

Crescendo - A steady increase in intensity or force; a gradual increase in the loudness of a sound or section of music.

The 2nd and the final installment in the Songs of the Fallen series had everything I felt the 1st was missing- My Review- Counterpoint (SotF, #1) by R. Haimowitz. I liked the 1st book in the series a lot, but I wished that there had been more in-depth building of the fantasy world and less of the war strategies and this time to my delight we get that and much more.

The 2nd book continues right after the ending of the first one and that worrisome cliffhanger. Freyrik & Ayden are being taken to see the Aegis, Freyrik's king who heard about Freyrik's victory and infatuation with the beautiful elf slave and doesn't seem so pleased with the fact that Freyrik kept Ayden hidden from him, but there's also a hidden purpose to it all about which they find out from the Aegis himself later on. After their arrival Freyrik & Ayden get separated and forced to get involved in the ruthless and corrupting politics of the court which puts again their love, life and possible future together on test and what's even worse they take away from Ayden the one thing he always could rely on, the core of his being- his magic.

"Deaf...No. Worse than deaf. For all the beauty in the world's music had been shattered, stripped away, leaving only this broken wailing wrong in its place."

The fantasy fans will be in for a treat with this installment, because the author truly did her best when it comes to creating a unique and interesting fantasy world. We get to meet both sides of the courts- the human's and the elven's, their politics and their background and in the end we finally find out what really had happened between their ancestors in the past and made humans and elves sworn enemies. In a magical world of lies, secrets, betrayals can something so pure as love survive?

The story was dark, thrilling, heart-wrenching with some steamy scenes inbetween. I liked Freyrik a lot, but Ayden has stolen the hit spot yet again and remains my favorite character in this series. Whereas he did have a few spoiled and immature outbreaks in the first book, in this installment his more mature and brave side came to attention and what was even more admirable- his unwavering devotion and love towards Freyrik. In comparison to him Freyrik had a few moments of insecurity and doubt this time making him quite selfish in my eyes and making me believe that Ayden put more on stake than him when it comes to their forbidden romance, but you just wait, because eventually he will do *something* truly brave and heart-wrenching which will redeem every moment of doubt.

One of the best characteristics of this story is the beautiful, poetic writing style. It truly shows the amazing talent of this author and when all secrets come out you'll understand the true meaning behind this title and the series and how they fit perfectly into the story. The only thing I wish she did a bit differently is the search and the battle against the Fallen in the 2nd half of the book which I felt concluded too quickly and considering its importance I think the author should have described it more thoroughly. Other than that the story was perfect and the ending was more than satisfying. I recommend this series to all mm readers who are fans of mm fantasy books with an epic love story. This series were my first reads by R. Haimowitz, but they definitely won't be the last.

"He risked meeting Freyrik's eyes, saw within them a reflection of the malestorm he heard  in Freyrik's song. Fear, anxiety, carefully controlled panic...And love, gods, such love. Trust me, his gaze said. Always, he thought back..."

Posted by PurpleBook at 7:56 PM