Review: END OF THE INNOCENCE (Innocence, #3) by Alessandra Torre 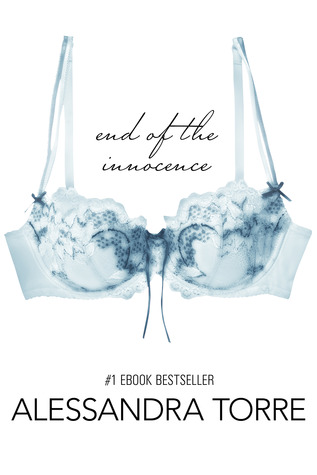 
He thought I owned him. He thought he loved me, that I was enough. But this animal, this sex god who could drive me crazy and steal my heart in the same breath, he would never fully be mine. It was impossible. No one ever owned a God…

One year. I have one year to find out more about this man I am marrying. More about his family. More about our sex, and all of the dirty, delicious places it will take me.

I thought I’d spend this year making a decision. I never thought the decision would be taken from me, snatched right from my naive little hands.

End of the Innocence covers the year Brad and Julia spent as a happy, engaged couple who had sex a lot (sometimes with other people included), ate, and were very happy and in love while planners dealt with the wedding preparations. Basically, it was about how everything was great in their lives. And while I do like fictional characters to be happy, I prefer they did their happy thing off pages, because for me that just isn't an interesting read. Sure, in between those long parts with them having sex or planning it, there were hints that something bad would happen; the book actually starts with Julia in some kind of trouble, but to me it lacked suspense. There were several things that could have caused some conflict, but all of them were resolved quickly, which was very anticlimactic. Julia's stalkerish ex-fiancé Luke seemed like someone who was about to stir up trouble, but simply fell out of the picture. Alexis, Brad's occasional lover, seemed determined to not let go of Brad at any cost--also fell out of the picture, forgotten. I don't understand why her POV was even in the book when it didn't lead anywhere. It even seemed like something would break between Julia and one of her best friends. That, too, resolved itself. And the biggest threat, Brad's mafia father, just went meh, I give up.

Honestly, I found this book to be about how Brad is every straight woman's (wet) dream. He was always so supportive of Julia, understanding, eager to please her in and out of the bedroom, give her everything she could wish for, do what she wanted him to do. He was, essentially, the opposite of those overbearing, possessive alpha jerks. Everyone was talking about how he was a control freak who always wanted everything to be controlled by him and him alone, but I did not get that impression at all. If anything, he seemed to be under control of women in his life. Julia was running their relationship, his secretaries took care of that at work (Rebecca seemed to have a great influence), his friend (whose name I forgot) was running the club the owned, Martha, his housekeeper, had him under her thumb at home... For a control freak he seemed way too comfortable with giving control to other people. I am in no way saying that's a bad thing, but it's weird that so many characters referred to him like that. Also, they were amazed that someone managed to "tame" the wild Brad de Luca. I must be missing something, because of the two main characters, I found Brad to be the sweet, tame one, and Julia the wild one.

Julia was a bit confusing. She adapted to living in Brad's life so well, but then again it's not hard to get used to good things in life. What was confusing is how someone who stands up to a mob boss, almost falls apart when some co-workers say something bad about her engagement. Oh, and at the end she appeared to have superstrength.

If you read this book, you'll find yourself jealous of Julia's life of pampering, massages with happy endings, shopping, a lovable fiancé who's hot and great in bed, willing to do anything she wished. Yes, there are many reasons to envy Julia.

I'd recommend this series to readers who are looking for a stress-free romance with a lot of sex, and readers who don't want to worry about something bad happening to the main characters at any time. A few things do fall under those "bad things", but their effect is small, and for the most part this really is a everything-sunny-all-the-time-always series.