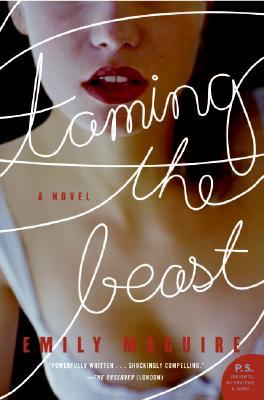 
"At the tender age of fourteen, Sarah Clark is seduced by her thirty-eight-year-old English teacher, Daniel Carr, and becomes entangled in an illegal, erotic, passionate, and dangerous affair, a vicious meeting of minds and bodies that ends badly. Devastated by grief and longing, Sarah embarks upon a series of meaningless self-abasing sexual encounters, hoping to reclaim the intensity of that first relationship. Then, seven years later, Carr unexpectedly returns and Sarah is drawn again into a destructive coupling. Now that she is no longer an innocent young girl, is she strong enough to finally tame the beast within her?
A modern Lolita, Taming the Beast is an emotionally unflinching and alluring tale that introduces a powerful new writer."

What did just happen? Again I am in position where I have no clue how to write review. It took me some time before I could make myself sit down and say something coherent and not sound like little kid that's just learning how to talk. Taming the Beast is not book for everyone. It deals with so many twisted, messed up things - I can't decide with to begin with. Taming the Beast could open up some old wounds if you were victim of abuse so think carefully before you pick up this book.

I'll have to insert few spoilers. This is not kinky, dark erotica. This is not the book that plays with your sexual fantasies. Taming the Beast is the story about abuse and way it affects lives of everyone involved. Told from perspective of Sarah and her best friend Jamie, it deals with subject of pedophilia and sexual abuse. Sarah was only fourteen years old when she had sex for the first time - in the classroom, with her teacher who is twenty four years older than her. I will repeat - he is her 24 years older teacher. Now you probably think it was a rape. Well, that is a tricky part - it would probably be a rape if Sarah didn't react the way she did. (And you are confused! I know, trust me. I figured some things out much later.) But does it make okay? Hell no!

But the story doesn't stop there - we will get a fast forward and meet Sarah again - this time she is very smart and beautiful college student known for her sexual exploits and Jamie, her only friend who knows the truth, as her constant guardian. She is epitome of liberated woman, but just on the outside - everything she does is because Sarah is broken and doesn't know how to deal. Her reckless actions doesn't affect only her, but everyone around her.

What made this book so intriguing is the way author gave you this two possible outcomes - what might have happened years back while she had set across from Jamie first time she met him and what did happen with Mr. Carr, and years later again - what might have happen if Mr. Carr didn't came back. All "might-haves" are there between the lines and your heart breaks for that girl who never really grow up and the boy who tried to save her all his life. It's not just Sarah who was victim of abuse, in some indirect way Jamie was victim too.

Emily Maguire doesn't just talk about victims - she goes one step further and gets in the head of abuser. You will realize just how horrific everything actually was when you read about his motivation and reasons for his actions. Both him and Sarah are victims and abusers at the same time.

Should you read this book? I honestly do not know. If you think that you can deal with this topic, you should - Taming the Beast is not light read and it's not novel about secret fantasies that should give you few hours of mindless fun. This is a kind of book that will hunt you for the rest of your life.