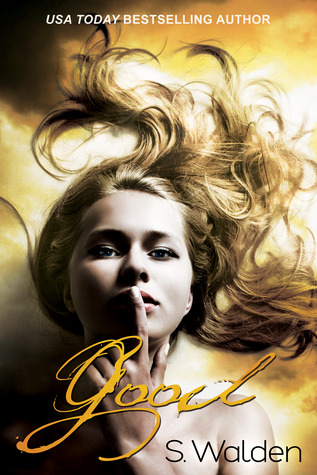 
"Cadence Miller is a good girl. She just happens to make one terrible mistake her junior year in high school which costs her ten months in juvenile detention. Now a senior, she’s lost everything: her best friend, the trust of her parents, driving privileges, Internet access. It’s a lonely existence.

But there is one bright spot: Mark Connelly, her very cute, very off-limits 28-year-old calculus teacher. She falls hard for him—a ridiculous schoolgirl crush headed nowhere. She can’t help it. He’s the only good thing at Crestview High. She doesn’t expect him to reciprocate her feelings. How inappropriate, right? But he does. And he shows her.
And that’s when her life goes from bad to good."

My Too Good series keeps lending itself to Pink Floyd songs, so I’ll just go with it. Speaking of, did anyone catch Cadence’s subtle Pink Floyd reference in Good when she’s talking to Avery in the cafeteria about how she feels? She describes herself as “comfortably numb.”

Yeah, music is a big deal in this series. It drives my characters. It sheds light on my characters. It heals and comforts them. It speaks for them when they don’t have the words. It’s no coincidence that I named my heroine “Cadence.” And it’s no coincidence that it’s her and no one else Mark feels compelled to pursue: “How could he ever forget that name? Cadence. Rhythmic. His song. His life. He decided that afternoon on the side of the road. She was his cadence.” There’s a little teaser for you from the upcoming sequel.

But music aside, I incorporate a lot of elements in my student/teacher series that buck the trends. And I really wasn’t prepared for the controversy my book would generate. After all, I’m far from the first author to write on such a taboo subject. But I suppose it’s the way I went about it—pushing the limits just a bit too far with a story set in high school and a heroine who starts out at seventeen. Didn’t matter that a sexual relationship between a 28-year-old and seventeen-year-old is perfectly legal in the state of Georgia. Because in the minds of some readers, it was never going to be okay.

I’m usually pretty good about doing my market research before giving myself the go-ahead on a book. Normally I like to see what’s trending and what readers are interested in devouring before I invest a massive amount of time in a story. I definitely don’t pander, but I also don’t want to waste my time and my readers’ time. Time is precious, after all. There are a lot of books out there to read! So I did some research and discovered that most student/teacher books toe a safe line. The line includes the following “acceptable” elements to include (or not) in this type of taboo story:


I totally understand why writers go this route. It’s safe. I mean, no one wants to be called a “SEX PERVERT” in an Amazon review or have her hero referred to as a “child predator,” “creep,” and “manipulator.” Then again, if I’m going to be true to my story, I recognize it’s the chance I take, and I can’t fault the reader for feeling uncomfortable, for getting angry, for feeling like she was reading something immoral. Evoking those types of emotions from readers is just as good as the positive ones. I made you feel. And that’s the point.

So yeah . . . I have no idea what all my market research was really for because I didn’t include any of the above-mentioned staples. I didn’t play it safe by setting the story in college, though I’m aware that it could have been received completely differently. I didn’t start my heroine at eighteen, and horror of horrors, I wrote a realistic seventeen-year-old girl! I made her moody and petulant and insightful and sweet and bitchy and jealous and awkward and naive and all the things that are so distinctly “teenage girl.” And then I paired her with a 28-year-old man who is the exact opposite, though he does have his own moments of utter immaturity. Don’t we all? I topped it off with a religious cherry, and that did it. How dare my Christian heroine have sex outside of marriage!

So why did I do it? Well, because despite what I learned about student/teacher books and how to play it safe, I couldn’t ignore the characters who burst in my brain. They told me what they wanted. They told me how the story should go. And I’ve no desire or intention to ever play it safe with my literature because I’m scared of its reception. Can’t do it. Won’t do it. To me, the risk of writing Cadence’s and Mark’s story and giving it to the public was well worth it. I believed in it. I believed in them. Still do, actually.

More importantly, though, is the idea of reality. I write realistic fiction. It’s not always easy to read. There are cringe-worthy moments. Moments that will make you blush. Moments that will make you scream, “Oh, no she didn’t!” Moments that will piss you off. And that’s okay. A story like this one is bound to elicit those kinds of reactions. It wouldn’t be good if it didn’t. As an author, I’m much more interested in making my readers feel something. I don’t care what that is as long as they’re engaged, challenged in some way, experiencing some sort of emotion. If I played it safe with Good and Better, all of that would be lost. The story, to me, would be meaningless, because I don’t know about you, but I want my literature to affect me in some way. Whether it makes me angry or explodes like sunshine in my heart, I want to feel the characters, journey with them, and come out on the other side with new insights: good, bad, or better.