Sexy commandos, wild under-cover agents, sweet and protective cops, badass bikers.. this series has it all! What they all have in common? They're their women's dream men. Every single one of them - in their own way. But hot, Alpha, possessive, caring, take-no-shit but understanding and smart - that's what all of them are.
Oh, who the best is, I have no idea! Every singe book amazed me all over again.

Okay, maybe book one Mystery Man with Cabe "Hawk" Delgado is my favorite. Badass, kinda superhuman, commando, sexy as all f*ck! And Gwen is my favorite heroine of all the four books - she was totally the funniest and coolest woman I have ever read about! She made the book two times better! She's tough, witty, never backed down from something she wants, or hid what she thought. These two were way cool, but they showed such emotion too that I cried a few times.

The second book, Wild Man, is often described as the least favorite of the four even though it's still worth a five star. To me, Brock Lucas and Tess were second best, after Hawk and Gwen. I don't know - there's just something sexy about a hot older guy knowing and going for what he wants and what he wants is the sweet, loyal and just perfect for him cake maker Tess O'Hara. But fear not, Tess has some backbone in her too! This book was even more emotional since it deals with some heavy stuff, but it's also emotional in a romantic sense. Brock may be a wild thing, but he's a sweetheart too. So, wild and sweet - mix it up and you've got yourself a winner.

The third book, Law Man, well, I'm a little conflicted with that one. It was great really, truly a 5 star, but Mara, the heroine, took shy and insecure to the extreme. She wasted too many years on her fantasies never daring to even talk to the guy. Poor Mitch was trying to get to her for so long! But when it happened it was sooo cute. This book is more about family then any other in the series. There are kids in most books but Billie and Billy here have big roles. It's about becoming a couple with a stable relationship so they can raise Mara's little cousins when their dad went to jail. I loved the angst it had, love the all-around family-feeling it had alongside Mitch and Mara developing their connection and Mara building up her confidence too. The book was totally cute with a side of hot-damn alpha!

The forth book and the most anticipated one since everyone keeps raving about Kane "Tack" Allen and I loved him since book one, but I gotta say, Motorcycle Man didn't quite amaze me. Maybe I expected too much, but either way I can't say I didn't like the biker stuff and Tack and Tyra butting heads being all stubborn and well, hot. Tack with all his goatee-d, sexed-up, older biker dude character and the caveman, 'I'm the boss', possessive vibe made this girl like things she never thought she would. I especially loved how Tyra didn't put up with Tack when he became overbearing, she explained to him that to make it work they both have to adjust their lives. Then all went much better.

What I love in this series is the KA humor, great plot structure with some suspense thrown in every book, the hot, hot, hot times (this woman knows her alpha sex scenes) ,but most of all - the emotion the characters express and the bonds these men forged protecting their women from every danger. I was often left in tears and always the happy ones. This series turned out to be one of my favorite, and I was so happy that KA didn't finish with this world and continued it in the Chaos series centered more about the Chaos MC whose president is our own favorite Tack Allen. So later guys, I have some hot bikers to read about!! 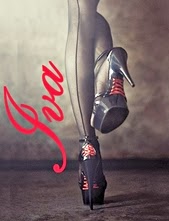