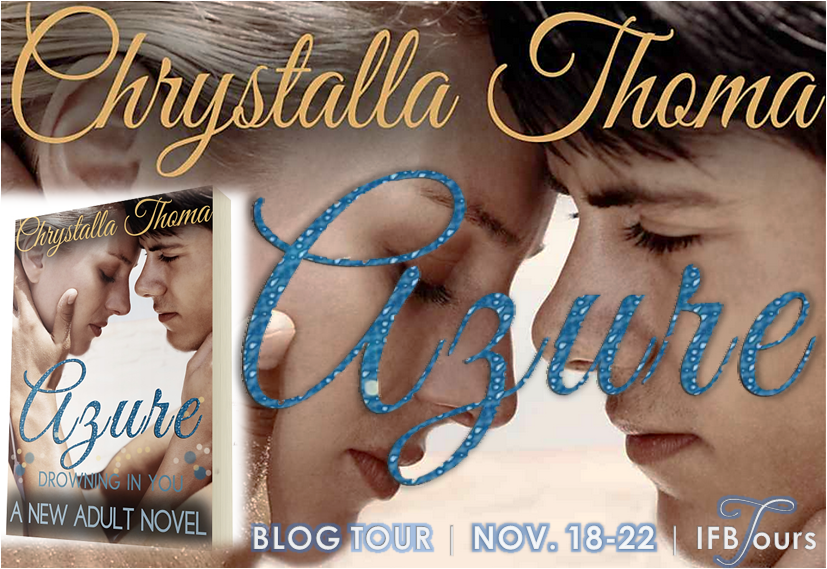 "A terrible mistake haunts college student Olivia Spencer. To escape the past, she travels to the Mediterranean island of Crete, hoping for the courage to start anew.

By the sea, she meets sexy and enigmatic Kai. But there’s more to Kai than meets the eye — and nobody wants to talk about it. The locals shun him, accusing him of magic. Kai, apparently, belongs to the sea, no matter how crazy that sounds.

Kai isn’t free to be with her or live his own life, and this is how he will stay, unless Olivia can break his curse and save him — in doing so atoning for those she failed in the past."

Better than I expected. One of the reasons why I was excited to read Azure is because it was written by European author. I didn't have high hopes, to be honest with you - I ended disappointed far more times than amazed by this type of books. Chrystalla Thoma, my fellow Balkan girl, managed to pull me into the story and make me forget about everything else.

Is it realistic or paranormal? This is one tough book to label. It's not paranormal in the terms of novels such as Black Dagger Brotherhood or Lords of the Underworld, but also it can't be described as realistic romance. Very strange, but in a good way - you'll get hints about something different than normal trough the whole book. There is no alternative mythical world, just a bunch or crazy islanders telling the weird stories about the sea. And the boy.

Perfect beach book. I know - it is almost winter, but if you are nostalgic for sun and warm days like me, this book will make you happy.  It starts really slow, maybe a little bit too slow, but I enjoyed all the descriptions. One thing that I couldn't overlook is the fact that main character is the American girl. I have major problems with authors who are not Americans and they still try to make their books about continent they probably never even been to or they visited it for short period of time as tourists. You notice the cracks in the story right away. I think it would be much better if Olivia was Greek girl visiting Crete over the summer.

Who should read Azure? Everyone who wants something little bit different from their usual reads.

She'd just chill out and read. she'd brought along a promising novel and she'd sit on her balcony with the view of the sea and sink into the story. Sink deep and lose herself in someone else's life. Characters in novels tend to have adventures that ended happily. It gave her hope.

"God, you're so beautiful," he whispered. "You're like made of honey and candies."
That made her want to laugh but she didn't, because he was made of cream and dark chocolate, so she could totally understand. His lips were like toffee.

Love isn't something you find everyday. Finding someone that makes you laugh and cry and fret and smile, someone who can make you happy is rare. Like, really rare. It can happen a couple of times, or only once in your life, or even never.

But the world isn't always happy and you can't always help. Some things people need to figure out on their own.

Greek Cypriot with a penchant for dark myths and good food. Chrystalla Thoma has proven her tendency to settle down anywhere but at home by having lived and studied in France, England, Germany and Costa Rica, before returning to Cyprus two years ago.

Chrystalla likes to write about fantastical creatures, crazy adventures, and family bonds. She lives in Cyprus with her husband and her vast herds of books. She's currently working on a few novels, including a vampire novel set in Cyprus, an epic fantasy trilogy, and a YA science fiction series.