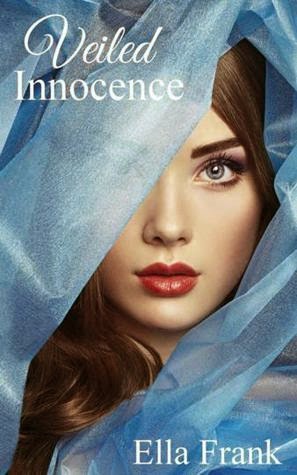 Tick, tick, tock.
Time.
That’s all I have now.
A small room, a photograph, and time.
They want me to trust them and confess my sins.
They told me they wouldn't judge me—they lied.
I thought we could convince the world that this wasn't a crime.
We were wrong.
Time doesn't stand still.
The clock keeps ticking, the world is unconvinced, and now…
Now he is gone.

***
My co-blogger Danija and I both decided to read Veiled Innocence with  high hopes. Danija is an old Ella Frank fan,  ever since she read Blind Obsession. This is my first Ella Frank novel, but as soon as I've heard it's a teacher/student romance, I decided to give it a try.
Sadly, we were both somewhat disappointed. Here's why.

Veiled Innocence had potential to be great, but sadly it did not deliver.

Student / teacher novels are a guilty pleasure of mine; I have read plenty of them, but I can name only a few I truly liked. The reason is, they deal with such a taboo subject and the author really has to portray the romance is such a way that the reader does not find it disgusting (age difference, moral reasons etc.), but also – not to portray it overly romantic and unrealistic.

So, I read for the thrill, that taste of forbiddance. Here, I was seriously considering giving up in the first 20%. Main female protagonist Addison, chases her teacher like a freaking stalker. The way it was described – new level of creepiness. And I saw absolutely nothing besides the sexual attraction between the main characters. She sees him for the first time, she wants him, so she pursues him. And him, Mr. McKendrick aka Grayson – at first he resists, but he gives in way too easily and way too soon. So, bam, they’re together, professing their undying love very early on. In addition to, I felt everything happened in a day, everything is a bit rushed, there was no real plot development.

However, as I’ve said, the novel had potential, if only the author decided to go in the other direction (I believe she kind of tried, by giving us a bold and brazen heroine who fearlessly pursues her teacher), but, here’s the huge but, in the end, I’m left disappointed because the novel offers us already seen clichés.

There were some moments I liked, for example the notion that Addison was Grayson’s monster, whereas he is her peace. I liked how Grayson’s confliction is depicted, he’s truly torn, he wants her, but knows he shouldn’t. My favorite scene is --SPOILER-- when his father dies, they’re having sex, and he wants to destroy her, but also to possess her at the same time.

I believe this would have been so much better if the author played on the love / hate card, even without the happy ending. (i.e. them not ending up together, instead: her – curing herself, and getting rid of the guilt, and him – getting rid of his monster, that is her. But that only happens in my head.)

Therefore, I liked the general idea (actually, I think I’ll like any book with this idea, forbidden or taboo), but overall realization left me wanting more.


It pains me to give this rating to an Ella Frank book. I actually can't believe I'm doing it, but it is what it is - I didn't like it. In no case I'm saying it's bad. It just didn't work for me.

I... I don't even know what to say. I'm very confused by all this. So very confused. But I'll try to explain why this wasn't a book I liked.

My first problem appeared right at the very beginning. Addison, the heroine, was my first problem. I simply didn't like her. I had hopes that would change later on, that I would understand her, and connect with her. Sadly, that did not happen. Being able to relate to the characters I read about, and ultimately liking them is very important to me when it comes to the books I read. In most cases, if I don't like the characters, or at least the main characters, I usually end up disliking the book, too. That is exactly what happened here. I didn't like Addison, and I certainly didn't like her behavior. In fact, I found her behavior towards her teacher repulsive and completely unacceptable. Even when I found out why she was behaving that way, that didn't change. By the end, she did appear more sensible, but that just made me wonder why in the world she didn't have that reasoning at the beginning. She was borderline obsessive about Mr. McKendrick. Honestly, I felt so bad for the man when she was so brazenly pursuing him. At one point, I almost expected she would threaten him to be with her.

Yes, later I learned the reasons behind Addison's actions, but I didn't think they justified her. Her parents were, indeed, horrible towards her (and for no good reason, if you ask me; accidents happen all the time, and them blaming Addison for what happened was so terrible, I couldn't believe it), but choosing to put someone else's life in jeopardy the way she did... I just couldn't get past it.

Mr. McKendrick... I'm not sure about him. Like I said, at first I felt sorry for him for being a target of a very persistent student, but that soon changed when he very easily gave in, and then proceeded to behave in a manner I found quite odd.

The relationship they had, I'm sorry to say, was something else I didn't like, and it wasn't because I had a problem with a student/teacher relationship. Although, I was a bit uncomfortable with that age difference, since she was only 18. My issue was that for a while it seemed as if it was purely based on physical attraction, so even when it was said that it was something more, I just didn't buy into it. It may be weird, but all those things they were saying and thinking about how they needed and loved each other so much that they gave each other's lives a meaning, I didn't believe in them, which made me sad and confused.

There's not much more I can say. I hope everyone else who reads this book has more luck with it. I went into it hoping to feel a least a bit like I felt while reading Blind Obsession, but I didn't. To me, something was missing that prevented me from being drawn into the story. I suppose I just needed something more.

So, in conclusion, it's me, not the book.