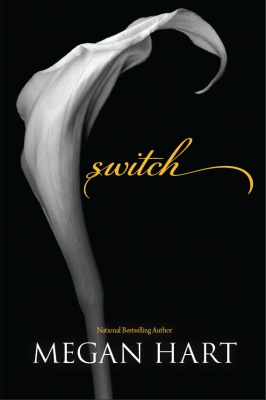 The anonymous note wasn't for me. Don't get me wrong, I'm not in the habit of reading other people's mail, but it was just a piece of paper with a few lines scrawled on it, clearly meant for the apartment upstairs. It looked so innocent, but decidedly-deliciously-it was not.

Before replacing the note-and the ones that followed-in its rightful slot, I devoured its contents: suggestions, instructions, commands. Each was more daring, more intricate and more arousing than the last...and I followed them all to the letter.

Before the notes, if a man had told me what to do, I'd have told him where to go. But submission is an art, and there's something oddly freeing about doing someone's bidding...especially when it feels so very, very good. But I find that the more I surrender, the more powerful I feel-so it's time to switch up roles.

We play by my rules now.


Switch on Goodreads
My rating: 4 stars

Long ago I've learned that when I get into what I like to call Megan-Hart mood, the best thing to do is to give into it and read a Megan Hart book. That was exactly what I did. And this book made me glad that I did it.

I must say, I expected something different from this book. The title made me instantly go to BDSM. (Yes, my mind is in the gutter. I know.) Then there was the blurb about some notes that could possibly be dangerous. My imagination went wild at that. But, even though I still have many books by Megan Hart to read (which makes me optimistic about my future reading), the ones I did read have made me expect certain things from this author's books. Luckily, I got that in Switch. Well, except there was less sex than you'd expect. I know, I was a bit disappointed, too.

On the bright side, the author's writing style has knocked me off my feet once again. Truly, it is something special. I always prefer to read her books slowly so I can take my time absorbing the words one by one, and prolonging my enjoyment of the story.

This story was about Paige, a woman who loved beautiful, quality stationery and writing instruments. I know it's silly, but I kind of liked her because of that right away, since I like it, too. Love for pretty paper and pens aside, Paige had quite a few complicated relationships in her life. That is something else I've come to expect from Megan Hart's books, as is that special way of describing them and resolving them, which did not fail in Switch.

Her father... Well, let's just say that the circumstances of her birth didn't make them the closest daughter and father. Actually, it appeared rather superficial and strained. But, luckily, Paige was a tough girl.

Her ex-husband, Austin, was very likeable. From what I've gathered they had many problems in their marriage, some of which were left to my imagination, but in present time in the book he was, like I said, likeable. To me, at least. In part, that was the reason those parts with the two of them broke my heart a little bit.

Then there was the very attractive neighbor, who I found adorable. Seriously, I want my own Eric, for he was just too cute. But what I meant to say that besides her ex, Eric was Paige's other romantic interest. And she was quite interested in both of them up until the very last page.

The part about her boss, who had some let's call them "special needs and requests" was also interesting. I loved how that relationship progressed. And, yes, I did find Paul sweet, too. Sue me.

All that would make any woman's life complicated. But, Paige honestly managed all of that quite well. She did it with maturity and unexpected ease. Frankly, I was very impressed with this heroine.

And all of that because of some mysterious notes...

Oh, the notes. I'm not going to say what was on them, who wrote them, or who they were written for. Read the book! If you want to, of course.