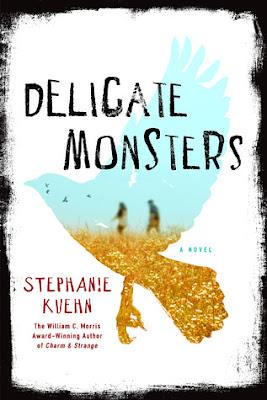 From the Morris-Award winning author of Charm & Strange, comes a twisted and haunting tale about three teens uncovering dark secrets and even darker truths about themselves.

When nearly killing a classmate gets seventeen-year-old Sadie Su kicked out of her third boarding school in four years, she returns to her family’s California vineyard estate. Here, she’s meant to stay out of trouble. Here, she’s meant to do a lot of things. But it’s hard. She’s bored. And when Sadie’s bored, the only thing she likes is trouble.

Emerson Tate’s a poor boy living in a rich town, with his widowed mother and strange, haunted little brother. All he wants his senior year is to play basketball and make something happen with the girl of his dreams. That’s why Emerson’s not happy Sadie’s back. An old childhood friend, she knows his worst secrets. The things he longs to forget. The things she won’t ever let him.

Haunted is a good word for fifteen-year-old Miles Tate. Miles can see the future, after all. And he knows his vision of tragic violence at his school will come true, because his visions always do. That’s what he tells the new girl in town. The one who listens to him. The one who recognizes the darkness in his past.

But can Miles stop the violence? Or has the future already been written? Maybe tragedy is his destiny. Maybe it’s all of theirs.

The things that we love tell us what we are. – St. Thomas Aquinas

This book is weird as fuck. There’s no other way of putting it. Psychological thriller at its finest. Honestly, I’m not even sure what is this that I’d read, how to categorize it. It’s not for everyone, that’s for sure. Is it for teens? Honestly, I don’t know. Just because characters are teens, does not make a book YA. Yes, sure things are not that graphically described, but sometimes that vagueness makes it even more eerie.

But there are some people who find comfort in discomfort. In knocking people out of their hamster wheels and setting them free onto the four-lane highway of reality. Look at Sartre. Look at Kierkegaard. Remember what he said? ‘The crowd is untruth.’ Kierkegaard knew. And people like that, like us, we’re the ones the hamsters should fear. Because other people’s fear, it kind of gets us off.

The title says Delicate Monsters, but trust me, there’s nothing delicate about this book. Characters are the exact opposite of delicate. They’re flawed, disturbed, and utterly fascinating. We have Sadie, who was expelled from boarding school because she tried to kill her classmate. You can see right away, we’re working with crazy here. Then there’s Emerson, who seems pretty normal at first, but boy is he gonna prove you wrong. And finally, we have Miles, Emerson’s younger brother, who always seems to be getting sick. Makes you wonder, what’s wrong with him?! Well, by the end you find out, and it ain’t pretty.

The novel is incredibly well-written; it’s really short, but the story moves slowly, and everything sort of creeps up on you. When I started reading, things seemed normal, and I thought well, this is okay, nothing that disturbing thus far. But, really soon, characters begin to show their true colors. And whether or not you enjoy their ‘colors’ remains the biggest question.

Sometimes to end things, you had to go back to the beginning.