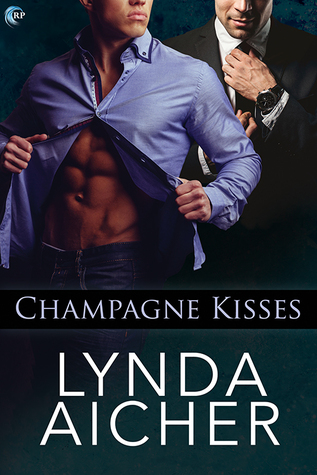 The Christmas Eve wedding Evan Cleary pulled together in four weeks is crashing down around him and taking his fledgling event planning business with it. With an empty altar and over a hundred guests arriving soon, he turns to the resistant, gorgeous brother of the runaway groom for help.

When Richard Patterson’s flamboyant brother storms out hours before he’s scheduled to marry his equally dramatic partner, Richard is left dealing with the fallout. The last thing he wants is more drama, yet he can’t deny his attraction to the effeminate event planner trying to salvage the wedding.

Evan thinks his crush on Richard is a lost cause, but one steaming kiss later, he learns different. What starts as a night of hot sex turns into a connection neither expected. But Evan knows their relationship is hopeless unless the ultra-conservative Richard can embrace every part of him—both in private and in public.

Champagne Kisses is a Christmas romance novella starring Evan and Richard. According to the author's note, they are an established, happy couple from her Wicked Play series, so this novella is perfect for those readers who've already met them in that series and wish to read their falling-in-love story.

The story takes place Christmas Eve when Richard's brother's wedding was supposed to take place, but due to the other groom's infidelity didn't. Evan, as a resourceful event planer, managed to avoid the negative effect on his business that cancellation would've had by turning it into a Christmas party for the wedding guests. The success of the party wasn't the only gain for Evan that night.
A night of hotness with Richard followed.

Evan had had a crush on Richard and fantasized about him ever since he started planning that wedding, but he never held any hope that the serious Richard would ever feel the same way about him. That night Richard proved him wrong. Richard proved himself wrong, too. While he couldn't deny he was attracted to Evan, Richard who had always disliked flamboyant, effeminate men, was still convinced he did not have room for a man like that in his life. But that night Evan and Richard put their differences aside, and enjoyed each other's company in bed... and near the bed... They took their sweet time bringing each other pleasure. That sex scene, where it became clear Richard liked to dominate in the bedroom, took up a lot pages in the novella. Not a bad thing, but I would have preferred if it had been a bit shorter. I also would've preferred it hadn't had moments that made me feel like I was reading M/F, and, unfortunately, I'm quite sure I would've liked it more if it really had been M/F. Oh, well...

By morning Richard realized that one night with Evan wouldn't be enough. Evan needed some persuading, but Richard succeeded, and the story was wrapped-up with a sweet epilogue with them happy and in love during Christmas that followed.

What I liked most about Champagne Kisses was Evan. Since this is only a novella, it didn't go deep into the characters pasts and backgrounds, but I learned enough about Evan and Richard. Both won my sympathies, but Evan I actually liked. Richard, not so much, or at all. Sure, he came around, but still... There was just something about him that bugged me.

I obviously have some mixed feelings about this novella, and they're getting even more mixed the more I think about it, but I'd still recommend to those looking for something hot and short to read, especially readers who are already familiar with this author's work.