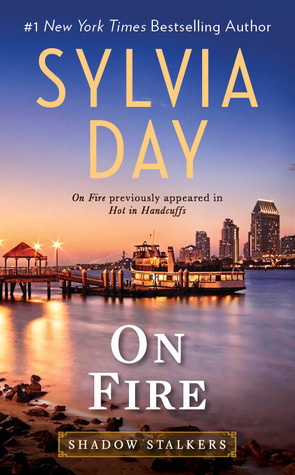 
From Sylvia Day, the #1 New York Times bestselling author of the Crossfire novels, comes On Fire, a novella of the Shadow Stalkers—where it’s futile to resist arrest or the power of a man with a badge. Just surrender. After all, you look so good in handcuffs…

Every time she opened her mouth, his mind went straight into the gutter…

When Deputy US Marshal Jared Cameron started investigating a series of arson attacks in the small seaside town of Lion’s Bay, he had no idea that the biggest blast of heat would come from the fire inspector. Her name was Darcy Michaels—and if there was anyone that Jared wanted to get down and sweaty with, it was Darcy.

Darcy knew what she was bringing out in Jared. In fact, she liked it. She reveled in making his dirty dreams come true. Stripped down for a scorching after-hours affair, Jared was her fantasy, too. A hard-driving man who knew exactly what to do to please her. But as hot as their nights were, they had no idea just how wild it was going to get. Because Darcy has a secret. And a past. And it’s drawing them right into the flames…

On Fire has an apt title. The main characters certainly behaved as if they were on fire for each other, and it was a series of fires that brought them together.

This was actually my second time reading this story. I first read it a couple of years ago as part of Hot in Handcuffs anthology. It was the story I liked best in it. It was also a time when Sylvia Day's books and I got along so great. Now my tastes have shifted in other directions, but still I wanted to read this series, and even re-read this one. For old times sake, I guess, and because I needed something on the lighter side to read. But, as was to be expected, I didn't enjoy it quite as much as the first time.
Darcy Michaels is a fire inspector, and when a series of fires went without getting any closer to identifying the arsonist, she called for outside help, and as fate would have it, that outside help included a man who'd soon set her body on fire, give her countless orgasms, and become very important to her that she couldn't imagine her life not including him, and that man's name is Jared Cameron. By soon I mean really soon, as in mere-hours soon that it all started, but somehow Ms. Day wrote these characters and the connection they felt that it all seemed natural.

On Fire is the longest Shadow Stalkers story, and while the others were about characters who had a history, here we have MCs meeting for the first time, so it's a good thing they had extra pages to develop their sizzling relationship. Jared and Darcy didn't waste a minute, and if I can say one thing about Ms. Days books, it's that they pack a lot of heat. For the most part, I like it, but honestly, after a while the whole "Oh, you're so tight" and "You're so big" and "You make me so hot" and whatnot talk gets to be a bit too much and rather annoying. Dirty talk is fine, but I would prefer it smaller doses. The same is with overly detailed descriptions. Nevertheless, Darcy and Jared were hot together, and I will give credit to Jared for only calling Darcy "baby" once. I wish it was none, because that is one of my big pet peeves, but I can live with once.

Bigger page count also allowed for some mystery and suspense to be a part of On Fire. As I said it was an investigation that brought Darcy and Jared together, and it uncovered some interesting connections to a past crime, which ultimately put Darcy in danger. It was interesting reading that. I didn't blow my mind or anything, but these stories, I believe, are mostly to have fun reading them, which I did. But now I think I'm ready for something different.

After almost two dozen titles by Sylvia Day, including contemporary, historical, and paranormal books, I can safely say that of all of them I liked her historicals best. I hope she'll write more of those. Until then, excluding One with You, I really don't see myself reading her books any time soon.
Until next time, happy reading!