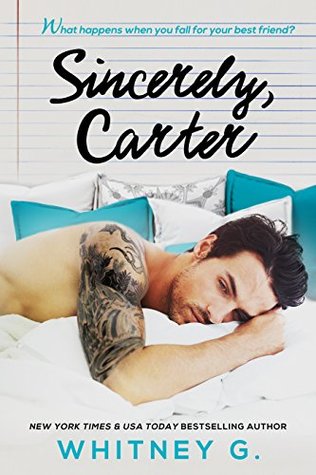 Arizona Turner has been my best friend since fourth grade, even when we “hated” each other. We’ve been there for one another through first kisses, first “times,” and we’ve been each other’s constant when good relationships turned bad. (We even went to colleges that were minutes away from each other…)

Throughout the years, and despite what anyone says, we’ve never crossed the line.

Never thought about it.
Never wanted to.

Until one night changed everything.
At least, it should’ve ...

Just friends.
We’re just friends.
I’m only saying this until I figure out if she’s still “just” my best friend…

Whitney Gracia Williams aka. Whitney G. was an unknown author to me until Reasonable Doubt and Andrew's appetite piqued my curiosity. Ever since I read that serial I've been following this author to see what comes next. That stalking--um, I mean following--alerted me to a secret book coming soon to our virtual bookshelves. Apparently, last year Reasonable Doubt was such secret project, and this time-- Sincerely, Carter . Of course, as far as I'm concerned, RD is a tough act to follow, and SC sounded completely different, but different was good, and I wasn't going to miss it.


Dear Miss Carpenter,
I am sorry that I was bad in class yesterday. I did not mean to cause a dissrupshun, and I am sorry that I broke your best pens, but I am not sorry that I HATE Arizona Turner.
She is ugly and she talks way too much. I don’t know why you never send her to the office like you send me. She deserves to be punish too, and I hope she dies tomorrow so I won’t have to see her or her ugly metal mouth anymore.
Sincerely,
Carter


This was the first Carter's letter in the book, and it was the cutest and the funniest beginning in a romance I've read in awhile. Granted, the main characters Carter and Arizona were in fourth grade at the time, and they "hated" each other, and what followed was them becoming best friends, but I can't look at it as anything but a start of a romance. Although, it did take years and years for them to get to the actual romance part.

And so many years have passed since that fourth grade hostility. Now they are college seniors and still the very best friends. It's a friendship that's discussed a lot amongst their other friends, acquaintances, and especially the people they dated over the years. No one seemed to understand how they'd been friends for so many years, and never ever even fooled around. Arizona and Carter, on the other hand, never even considered taking their relationship in that direction, they didn't even find each other attractive. For the most part, they were busy with their successful friendship, and failed romantic relationships. Until one day when everything changed, when they almost simultaneously started looking at each other differently, and very soon they could not use the sentence We're just friends without lying.

I was pretty sure I loved him, and not in the way I loved him before.
This was different. This was “I needed to have him every hour of the day”, “be around him whenever I could”, and “do whatever I could to have him” type of way.
From the way he looked at me, I could tell he felt the same.


As you can guess, what came next, in short, were the sweaty, dirty parts, the realizations they're very much in love, conflict, breakup, makeup, and happy ending. All in all, it was a nice, quick, low-angst, fun friends-to-lovers story, and overall, I liked it, but I would have liked it more had some things been different. I can't say I've read many friends-to-lovers romance books, so I don't have much information on how that theme is usually done, but what I found lacking in Sincerely, Carter was the buildup to that point where the main characters realize they want more from each other than a friendship, more buildup to them acting on their attraction. Just more, you know? All that and other things happened too quickly and too easily for my taste. I suppose I expected/hoped for something more angsty.

This is still a sweet story in my opinion, and a good choice for times when you're in need of a lighter read, and I'm sure we all need those from time to time. Plus, I think the chapter titles will be to the liking of all Taylor Swift fans. Too bad I'm not one of them; I'm sure if I were, I'd appreciate them more.

In the end, all that's left for me to say is that I'm really looking forward to seeing what Whitney G. publishes next.


***ARC provided by the author in exchange for an honest review.***